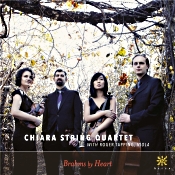 For those readers not aware, the Chiara String Quartet is a string quartet based in Lincoln, Nebraska. They are the Quartet-in-Residence at the University of Nebraska-Lincoln's School of Music, Harvard University's Blodgett Artists-in-Residence, and faculty in residence at the Greenwood Music Camp. Joining the group's regular members--Rebecca Fischer and Hye Yung Julie Yoon, violins; Jonah Sirota, viola; and Gregory Beaver, cello--for the Quintet No. 2 is violist Roger Tapping.

The group has been performing professionally since 2000, and they are currently in the midst of recording all of Brahms's string quartets and the aforementioned quintet. Yes, they are very, very good, and, yes, they are strong in the present album. Even a lukewarm Brahms fan like me found the music making engrossing; I'm sure the serious Brahms enthusiast would love it.

While it probably seems to you, too, as though German composer Johannes Brahms (1833-1897) wrote about 800 string quartets, he actually published only three, the three we have in this set. Something of a perfectionist, he reportedly destroyed about twenty other quartets he had written before the Quartet No. 1 in C minor, Op. 51 in 1873 finally satisfied him. No doubt it had something to do with his inferiority complex when he compared himself to Beethoven as he didn't write his first symphony until relatively late in life as well.

Anyway, the Chiara players are a delight in both of the first two Op. 67 quartets. A booklet note tells us that the "Chiara Quartet is moving forward by taking a cue from the past. Harkening back to a tradition that is centuries old and still common among soloists, the Chiara Quartet has adopted a new way of performing from memory or 'by heart.' After memorizing a work, the Quartet is rewarded with deeply gratifying performances in which each member feels fully present in the moment, truly performing with heart, by heart."

It must work since they sound so good together. They certainly pour strong feelings into each piece of music, playing up the contrasts in the score with gusto and emphasizing the vitality of every note. When they're moving along well, they adopt a zippy gait, and when they slow down, it's to a comfortable and meaningful pace. Whatever, memorized or not, they play together with precision, bringing both emotion and accuracy to their performances, from stormy intensity to hushed tranquility and from subtle beauty to sudden outbursts. 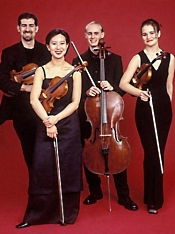 It would be about three more years after Nos. 1 and 2 before Brahms premiered his next string quartet, the Quartet No. 3 in B-flat Major, Op. 67, in 1876. He called the work "a useless trifle," and it is, indeed, carefree and joyous. Again, we get clean textures from the Chiara players in a piece that bears some superficial resemblance to the work of Mozart and Beethoven. Compared to Quartets 1 and 2, No. 3 seems more relaxed and better unified, too. The Chiara group revel in the lovely tunes Brahms devised, and they give special attention to the climax of each movement, building the tensions slowly but attentively.

Brahms didn't publish the Quintet No. 2 in G Major, Op. 111 until 1890, just half a dozen years or so before his death. The Quintet adds a second viola to the usual complement of two violins, viola, and cello. Moreover, the Quintet seems built on a more-imposing scale than the Quartets, suggesting that perhaps Brahms had intended some of the music for inclusion in a possible fifth symphony. The Chiara ensemble surely do the work justice, playing it in grand style, the melodies soaring, the intertwining of the instruments sounding richly generous and robust. The third and fourth movements with their Gypsy-like intonations are particularly beguiling. Expertly played, this is chamber music for listeners who say they only like symphonic music.

Produced and engineered by Judith Sherman and assisted by Jeanne Velonis, the Chiara String Quartet recorded the music at the Troy Savings Bank Music Hall, Troy, New York in April 2012. The first thing one notices about the sound is how vibrant and dynamic it is. There is nothing vague, recessed, or reticent about it, nor is it bright or edgy. It is moderately close yet not in your face. It's quite realistic, in fact, with good body and definition and plenty of air around each instrument.