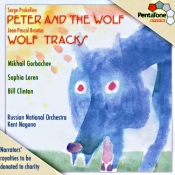 Mikhail Gorbachev? Sophia Loren? Bill Clinton? What goes on here? PentaTone Classics assembled an all-star cast of narrators for their coupling of Prokofiev's perennial favorite, Peter and the Wolf, written in 1936, and Jean-Pascal Beintus's newer work, Wolf Tracks, which premiered in 2002. The PentaTone disc, which won a Grammy in 2004, is a plea for cooperation and understanding among the peoples of the world and the environment they share. It's really quite a sweet notion, and the coupling of the two compositions effectively demonstrates the viability of the idea. Now, if we could just force the governments of the world to listen and behave themselves, maybe we'd get somewhere.

Mr. Gorbachev introduces the disc, comments in between the two works, and concludes with an epilogue. Ms. Loren sweetly narrates Peter, and Mr. Clinton narrates Wolf Tracks. Together, they make a formidable team. Of course, despite the disc's well-meaning intent, it is probably for Peter and the Wolf that most people would buy it, and, fortunately, it is a decent account. Ms. Loren injects a note of warmth and humor into the piece, and Kent Nagano and the Russian National Orchestra play with conviction, grace, and wit. Never does Nagano let the work flag, and never do the characters it portrays seem anything but well defined and recognizable. Although I still have a special fondness for the old (1957) Vanguard recording of Peter, wonderfully narrated by Boris Karloff, it's not a bad account from this newcomer, if gentler and less menacing. 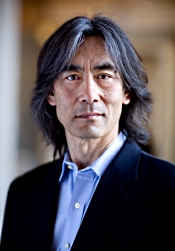 The companion piece, Wolf Tracks, is a more debatable proposition. If somewhat lightweight, it's nevertheless a pleasant enough appeal for tolerance, as Peter's grandson learns about the importance of wolves and all creatures in the great scheme of things. I enjoyed it, along with Mr. Clinton's homey touch at narration, but it isn't the kind of thing I might find myself going back to. It was kind of a one-off proposition for me.

The 2003 audio from PentaTone reminds me of some of Telarc's albums, and the recording comes to us as a hybrid Super Audio CD (SACD), so it contains both a multichannel layer and an ordinary two-channel layer. One can play it on an SACD player or in stereo only on an ordinary CD player. As one might expect, it sounded fairly good in the two-channel SACD stereo mode to which I listened, the narration perhaps a little close but the orchestra opening up well behind it, both left-to-right and front-to-back. Frequency response, bass, transient impact, and such are what we have come to admire from SACD's, perhaps a tad warm, soft, and veiled but natural enough regardless.