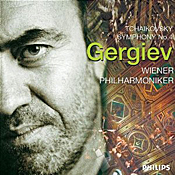 Following up on his highly acclaimed account of the Tchaikovsky Fifth, released in 1999, came his rendition of the Fourth Symphony, recorded in 2002 but unaccountably waiting until 2005 to see the light of day. Anyway, if you are familiar with Gergiev’s way with Tchaikovsky, that is, no holds barred, you will surely like his interpretation of the Fourth.

The lengthy first movement is practically a mini symphony in itself, most of it bluster, and Gergiev plays it that way, with plenty of gusto and excitement by the close. The second, slow movement has never struck me as memorable, and not even Gergiev can do much with it except hope to get it out of the way, although he does so with a graceful hand. Gergiev could have taken the pizzicato Scherzo more playfully, but it comes through fine, especially with the Vienna Philharmonic playing with such finesse. The Finale, one of Tchaikovsky’s biggest showstoppers, gets the full-bore, hell-for-leather treatment, starting strong and ending in an appropriately thrilling ride. 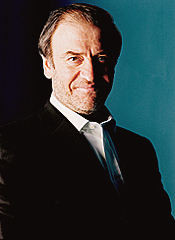 The thing that undermines the performance, however, is Philips’s sound, which the company recorded live, with all its attendant problems. No matter how loud the music gets, it always seems reticent, held back, distanced, and muted. Thus, much of the animation Gergiev attempts to generate rather evaporates within the softly shrouded sonics. The recording is also available on a hybrid SACD in multichannel surround, however, and for those of you with the appropriate playback equipment it may effect an improvement in the sound.

By comparison, the studio recordings of Szell (Decca), Jansons (Chandos), and Haitink (Philips) sound better and more open, while Monteux (JVC) may be best of all. In fact, a side-by-side comparison of Gergiev and Monteux was such a night-and-day difference sonically as to take my breath away. Considering that the Monteux recording is over four decades older than Gergiev’s, that’s quite an accomplishment, even if you have to pay double for the JVC audiophile edition to get it. And, incidentally, I like Monteux’s performance better as well.