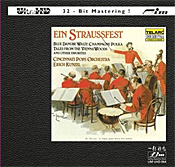 Maestro Erich Kunzel may have made more recordings than almost any conductor in history, but when it came to the music of the Strauss family, he didn’t quite project the delight of a Willi Boskovsky, the glamor of a Herbert von Karajan, the energy of an Antal Dorati, the elegance of a Josef Krips, the warmth of a Eugene Ormandy, the high spirits of a Lorin Maazel, or the Viennese charm of a Fritz Reiner or Zubin Mehta or Jascha Horenstein. Instead, Kunzel’s readings are more exhilarating than illuminating. That said, when the sound comes across as impressively as it does here in this LIM audiophile remaster of a 1985 Telarc release, it probably doesn’t matter. The sonics rather overwhelm the notes and carry us along, making us marvel anew at the creative genius of the Strauss family.

The program begins with a bang, with a real explosion at the start of the Explosions Polka. Then, we get three more quick-paced polkas and galops, again with sound effects such as, literally, various bells and whistles, popping corks, pistol shots, and thunderclaps in the Im Krapfenwald’l Polka, the Champagne Polka, and the Banditen Galop. Some purists may feel Telarc indulged in too many such aural effects, but one should keep in mind that when the Strausses wrote this music, audiences enjoyed and expected a degree of extravagance.

The first big waltz comes with On the Beautiful Blue Danube, in which Kunzel seems at first a little earthbound and mundane; however he soon warms up to the piece, even if he never quite gets the full measure of the waltz rhythms involved. Likewise, his handling of Tales from the Vienna Woods never exactly catches fire until well underway. It’s as though the conductor were holding something back for as long as he could and then still wasn’t entirely sure how to cope with the pulses of a waltz. There follow the Radetzky March, the Feuerfest Polka, the Auf der Jagd Polka, the Bahn Frei Polka, the Pizzicato Polka, and the Unter Donner und Blitz Polka, numbers that come off best.

If I have any reservations about the album, they include the short playing time (48:10) and the preponderance of fast tunes on the program, with only two waltzes (The Blue Danube and the Tales from the Vienna Woods). So it’s more of showpiece than I’d like. Still, with the inclusion of an outstanding Radetzky March, it’s hard not to enjoy the selections.

Although there is a certain lack of subtlety in Kunzel’s conducting and although the Cincinnati Pops lack the plush precision of a Vienna Philharmonic, the conductor and orchestra are clearly having a good time, and their enthusiasm shows. 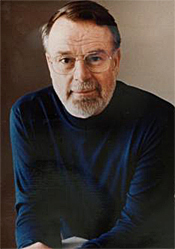 Telarc recorded the album in 1984 at Music Hall, Cincinnati, Ohio, releasing it the following year, and LIM (Lasting Impression Music, a division of FIM, First Impression Music) remastered it in 2012 in their UltraHD 32-bit mastering process. Engineer Michael Bishop, who helped with the original recording, supervised the remastering, and the meticulous UltraHD system did the rest. The sound is very dynamic, with a slightly improved transient impact over the original Telarc product. Yet we also hear a very smooth, warm, lifelike response, without a trace of brightness or edge, which is probably the best quality of the remastering. Music Hall imparts a pleasant resonant glow around the sonics that some audiophiles may think detracts from the disc’s midrange transparency and others may feel adds to the album’s overall realism. Adding further to the natural-sounding effect of the acoustic is a good measure of depth to the orchestra; it’s easy to listen “into” the players and distinguish their relative distances from one another. Thus, imaging, always a hallmark of Telarc, is better than ever. Finally, you’ll of course find the big Telarc bass drum in evidence throughout. This remastering is all about big, room-filling sound, which you get in spades.

As always, LIM dress up the disc with an attractive, high-gloss foldout container, the disc itself enclosed in an inner paper sleeve and a static-free liner. It’s a handsome package.