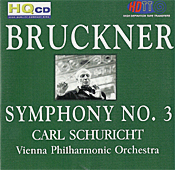 For me, listening to a Bruckner symphony takes patience. Plenty of it. In part, this is because Austrian organist and composer Anton Bruckner (1824-1896) wrote long symphonies. Very long symphonies. And in part it’s because beyond hewing to conventional four-movement structures, Bruckner ventured into new harmonic, even dissonant styles. Sometimes, the listener must sit and wait in vain for a major thematic element to manifest itself, and then wait some more for Bruckner to develop it. Nevertheless, when performed by the right people, Bruckner’s music can be quite satisfying, reaching heights of spiritual ecstasy seldom attempted by other composers. Among conductors who have brought joy to recorded Bruckner performances are Eugen Jochum, Otto Klemperer, Herbert von Karajan, Karl Bohm, Bruno Walter, Gunter Wand, Herbert Blomstedt, Bernard Haitink, Sir Roger Norrington, and the man under consideration here, German conductor Carl Schuricht (1880-1967).

Schuricht never seemed to have gotten quite the credit he deserves, perhaps because he made so few recordings for major record labels compared to the conductors mentioned above, although to be fair he did a number of things for EMI and Decca late in his career. HDTT, for instance, took this Bruckner Third from a 1965 EMI recording. For the listener new to Bruckner or for the old Bruckner hand, Schuricht’s performances make a good starting point as he clarifies the composer’s intentions so well. In effect, he simplifies Bruckner for us while never diminishing the composer’s work.

Actually, none of Bruckner’s nine symphonies really took off with the public until he premiered his Fourth Symphony, maybe because the Fourth acquired a nickname, “Romantic,” and because Bruckner gave each of its movements descriptive titles. He hadn’t done it before and didn’t do it again. In any case, he wrote his Symphony No. 3 in D minor, WAB103, in 1873, revising it (as he was wont to do with all his works) in 1877, 1880, 1889, and beyond. What we get here is Schuricht’s interpretation of the final revised version of 1889 in an edition published by Theodore Rattig in 1890. Whether you agree that it’s the best version to perform, since it contains some major changes, cuts, and additions, is beside the point; Bruckner himself never seemed entirely satisfied with any of his compositions and often made revisions on the advice of friends, whether those revisions were good for the music or not.

The Third Symphony is grand, heroic, and often majestic, yet under Schuricht we hear more of the beauty, lilt, and lyricism of Beethoven and Schubert than of, say, the sublime, melodramatic intensity of Bruckner’s contemporary, Richard Wagner. Schuricht does not romanticize the music despite its being solidly grounded in the Romantic tradition. What’s more, Schuricht ties the various musical strands together as well as anybody. Bruckner tended to be a bit Raggedy Annie about his themes, so seeing the connections is important. 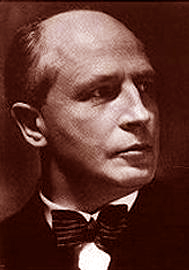 The conductor maintains a no-nonsense approach throughout the symphony yet still captures much of the work’s elusive beauty. The performance has a fleet pace while ensuring a smooth, orderly flow of ideas. This doesn’t make it any better a symphony--it’s still too long and too diffuse for my taste--but it makes it a lot easier to listen to than most other interpretations. Besides, the Vienna Philharmonic, always one of the world’s great orchestras, never sounded richer, more luxurious, or more precise.

Of all the movements in the symphony, it’s the Adagio that for me fares best, a lovely, rhapsodic set of melodies, which Schuricht handles delicately yet without sentimentality. The Scherzo skips along at a cheerily enlivening clip, followed by a truly moving finale. Anyone interested in the Bruckner Third Symphony might consider starting here.

EMI recorded the music at the Vienna Musikvereinssaal in 1965, where they obtained excellent results, transferred with loving care to the HQCD product to which I listened. The sound is very transparent, with a good sense of orchestral depth, a wide dynamic range, a broad stereo spread, a strong impact, and a taut bass. It’s a tad forward in the lower treble, giving it an additional clarity. Moreover, there’s just enough warmth, resonance, and acoustical air to provide a realistic sense of occasion. In short, this may be the best-sounding recording of any Bruckner symphony currently on the market.

For further information about HDTT discs and downloads, you can check out their Web site at http://www.highdeftapetransfers.com/storefront.php.