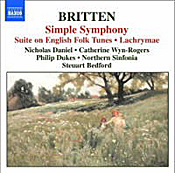 There probably isn’t another conductor alive who knows the works of Benjamin Britten better than Steuart Bedford. A booklet note tells us that he was an occasional collaborator with the composer and conducted Britten’s operas “throughout the world, including the world première of Death in Venice in 1973.” I don’t know if that qualifies Bedford’s interpretations as the most definitive ones--Previn, Hickox, Handley, Marriner, Rattle, and the composer himself being no slouches with the scores--but Bedford certainly makes them enjoyable. 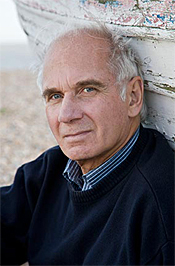 I have to admit, though, that I liked the first and last of the five works on the disc best. They would be the youthful Simple Symphony (1934) and the far more mature but still enthusiastic Suite on English Folk Tunes (1974). The three other pieces, Temporal Variations (1936), A Charm of Lullabies (1947), and Lachrymae (1976) are a bit too serious and somber for my taste. Still, Bedford performs them all in an obviously loving manner, with no excessive affectations to mar the naturalness of the music.

The Naxos sound goes a long way as well toward helping one enjoy the album. The Naxos engineers have created a wonderfully clean, detailed soundstage, with instruments well defined and frequency balances well gauged. As the Northern Sinfonia is a relatively small group (Britten intended the music for chamber orchestras or even quartets), the textures would presumably be more transparent, anyway, but the Naxos sonics make a good thing even better. Well, actually, the relatively low price probably makes it even better. I mean, what more could one ask for than excellent performances in excellent sound at the such a reasonable price?

Email ThisBlogThis!Share to TwitterShare to FacebookShare to Pinterest
Labels: Britten