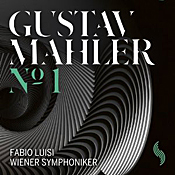 Maybe it’s just me, but there appears to be a slew of new Mahler recordings every month. Is there any composer save Beethoven who gets as much attention in the music world? I dunno. I suspect it’s in part because Mahler’s music has so much variety that it appeals to all kinds of listeners and because Mahler recordings have such a wide range of frequencies, contrasts, and dynamics that they appeal to hi-fi enthusiasts.

Whatever, here’s another entry, a recording of the Mahler First that appears to be a part of a cycle of Mahler symphonies from Italian Maestro Fabio Luisi, the Chief Conductor of the Vienna Symphony and the newly named Principal Conductor of the Metropolitan Opera. Although I was not familiar with Maestro Luisi’s work until now, on this disc he impressed me with his precise yet passionate execution. Certainly a conductor to watch.

Austrian composer and conductor Gustav Mahler (1860-1911) completed his Symphony No. 1 in D major in 1888 while still in his twenties. Years later, fellow Austrian composer Arnold Schonberg suggested that the First summed up everything that Mahler would elaborate upon in his later music. Mahler said he was trying to describe in the First Symphony a progression of his protagonist facing life, beginning with the lighter moments of youth to the darker years of maturity. Mahler even called it a tone poem at first rather than a symphony, and he gave each movement a programmatic title (which he later regretted). Maybe Schonberg was right because we do see the same thematic and stylistic elements in the rest of Mahler’s symphonies.

In the first movement, “Spring without End,” Mahler represents his youthful hero in the symbolic stirring of Nature before a long spring. Luisi handles the long, lyrical opening sequence beautifully, evoking the delicate longings of Spring with grace and beauty and, symbolically, the humanity and culture that comes with it. We can hear in the music both the high spirituality and the moralistic suffering that would befall the hero and Mankind itself. Seldom do we find the music so carefully thought out, structured, and presented as it is here.

In the second-movement Scherzo, “With Full Sail,” we find Mahler in one of his early mock-sentimental moods, displaying an exuberance that he may have meant as ironic. Again, we get both a dramatic yet intellectual approach from the conductor. He emphasizes precise outlines for the music, a little too deliberate, perhaps, but clearly underlining the hero’s fullest entry into a complex world.

The third movement is an intentionally awkward funeral march depicting a hunter’s fairy-tale burial, coming off as a typical Mahler parody. It may represent the hero’s first glimpse of death or possibly Mahler’s own recollection of a youthful encounter with the death of a loved one. This movement has long been one of the Mahler’s most controversial, with audiences still debating just what the composer was trying to suggest. Perhaps life is as sardonic as the juxtaposition of the grotesque funeral march, the rustic music, and the lovely ballad depict? Be that as it may, Luisi makes the distinctions as obvious as possible for the listener. 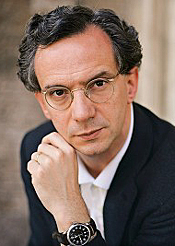 In the finale, Mahler conveys the panic “of a deeply wounded heart,” as his central figure faces the suffering of life and fate. Nevertheless, Mahler, always the spiritual optimist, wanted Man to triumph in the end, even though he left open to question how Man would succeed. In these final twenty minutes or so, Mahler pulls out all the stops and puts the orchestra into full swing, making it an audiophile favorite for home playback. However, we must ask at this point in the symphony if life’s tumults truly come to a resolution in the hero’s final victory over life’s ups and down, or if the triumph is illusory, a temporary conquest, as ironic as the preceding funeral march. Luisi wants us to be sure to see that as Mahler’s final question, and he nicely pinpoints the final dualities. There is nothing easy here about the music or our understanding of it. Life is not that simple say Mahler and Luisi: Get used to it.

With the music’s questions so well framed, Luisi’s interpretation is among the most satisfying I’ve heard in years. In a field already overcrowded with names like Solti, Haitink, Bernstein, Horenstein, Tennstedt, Mackerras, and the like, Luisi produces a distinctive mark of his own.

The Vienna Symphony made the recording in the ORF Radio Kulturhaus, Vienna, in 2012. I’m glad they chose to do it as a studio performance and not live, since they got a better-sounding recording out of it, free of extraneous audience noise. The sonics display an excellent sense of depth, a wide frequency response, and a strong dynamic impact. The music comes across as airy and open, with a bass that’s taut and well defined, if not particularly deep. Because there is a wide dynamic response involved, the general volume level is somewhat low, so handle the gain accordingly. Overall, the sound is a tad lean, yet it is also quite smooth and natural, conveying a realistic feeling of being in front an actual symphony orchestra.