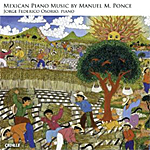 The opening piece on the disc, "Estrellita," is ravishingly, heart-meltingly exquisite, and pianist Jorge Federico Osorio captures perfectly its beauty and charm. It's just the beginning of an album filled with such delights.

People probably know Mexican composer Manuel Ponce (1882-1948) best for his guitar works, but the booklet note reminds us that the composer's favorite instrument was the piano. The disc contains twenty-two short works for solo piano, most of them almost as attractive as "Estrellita." Ponce based the music largely on Mexican and Cuban folk tunes, but there's a lot of originality at play as well.

Moreover, most of the music is light, romantic, and lyrical, Osorio playing with a delicate touch. Perhaps the only exceptions to this style are the Estudios de Concierto Nos. 3, 7, and 12, which tend to be more outgoing and extroverted. If there is any minor snag to the album, it's that by the time it's over, you may feel a lot of it sounded alike. So be it; it's a lot of very nice alike.

Among the other items you'll find on the disc are three Canciones Mexicanas; three selections from Trozos Romanticos; the elegant Legende; eight Mazurcas, styled after the Polish dances; the Suite Cubana, inspired by the more sensual music of Cuba; and Deux Etudes Pour Piano, dedicated to Artur Rubinstein. Osorio seems at home with all of it.

One of my favorite audio engineers, Cedille Records' Bill Maylone, engineered this one, capturing the piano most realistically. No fear here of a twenty-foot instrument spread across your living room. Instead, the piano is miked at a moderate distance, presenting a modest but still imposing size, with sonics that are never hard or glaring, yet never soft or lumpy, either. In fact, the piano sounds like a piano, which is all that one could ask for. This is beautiful music, beautifully recorded.

Email ThisBlogThis!Share to TwitterShare to FacebookShare to Pinterest
Labels: Ponce