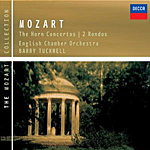 Horn virtuosos must have a hard time finding enough concertos written specifically for their instrument to fill up a very large stock of recordings, so it's understandable that Australian horn virtuoso Barry Tuckwell, one of the finest horn players in the world, would record Mozart's popular Horn Concertos over and over. By my count, Tuckwell has recorded them at least four times, this one, performed with the English Chamber Orchestra in 1983, among the very best he's done.

It was the first of several recordings of the works he would do digitally, and he leads the orchestra as well as plays the instrument. The performance finds him as his most easygoing, amiable best, the horn sounding like melted butter, and the sprightly hunting melodies coming out as pleasingly as one could want. They perhaps lack the ultimate elegance and distinction that marked Dennis Brain's famous mono set with Karajan (EMI), but the Tuckwell set has charms all his own, not the least of which is the generally excellent support of the ECO, the sound Decca provide, and the accompanying Rondos and fragments.

I don't usually like to tell people what to buy, it's not my business, but I should think that anyone interested in classical music would own at least three accounts of the four Horn Concertos: a recording on period instruments, one on modern instruments, and the one with Dennis Brain. For period instruments, my own favorite is the release from horn player Lowell Greer, conductor Nicholas McGegan, and the Philharmonia Baroque Orchestra on Harmonia Mundi; for modern instruments, my favorites are the Tuckwell reviewed here, plus Alan Civil with either Rudolf Kempe or Otto Klemperer on EMI and Eric Ruske and Charles Mackerras on Telarc. And to make good things ever better, they all sound full and rich, the Telarc perhaps the smoothest.

In any case, it's nice of Decca to reissue Tuckwell and the ECO at mid price; it makes a tempting buy.