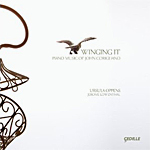 Although folks have been recording his music as much as ever, I hadn't personally heard anything from John Corigliano (b. 1938) for a while; so it was nice to hear this new album of piano music from Cedille, played with care by the distinguished American pianist, Ursula Oppens. Corigliano, as you probably know, is an American composer, teacher, and Pulitzer Prizewinner, a music professor at Lehman College, City University of New York, who numbers among his more-famous pupils Avner Dorman, Scott Glasgow, Elliot Goldenthal, Edward Knight, John Mackey, Nico Muhly, David S. Sampson, and Eric Whitacre. While he has written most of his compositions for orchestra, the present disc contains several of his popular piano works and a world-premiere recording of the title piece.

The program begins with the first-ever recording of Winging It (2007-08). Playing on a Steinway, Ms. Oppens effortlessly captures the remarkable dynamic range of the music from loudest to softest passages. Corigliano based the three movements on improvisations he made, and he titled them with the dates he first played them. He explains in a booklet note the difficulty he had transcribing the improvs, which seems a contradiction when you think about it. I mean, if it's written out, is it any longer an improvisation? But I quibble. The piece follows a traditional fast-slow-fast arrangement, with the slow movement most affecting and the others a bit clamorous.

Next up is Chiaroscuro for Two Pianos Tuned a Quarter Tone Apart (1997), also in three movements, these titled "Light," "Shadows," and "Strobe," which Ms. Oppens performs with Jerome Lowenthal. Here, Corigliano says he was "looking for the expressive power between two notes, as a blues singer does." The effect is often startling and always intriguing as the music explores the allocation of light and shade in the music.

Following Chiaroscuro comes Fantasia on an Ostinato (1985), a single, brief movement that develops, as the title suggests, a recurring melodic fragment. The Van Cliburn International Piano Competition commissioned it as a piece to be played by their twelve semifinalists, and Corigliano intended it to exercise each pianist's imagination while working with something entirely new to them. It is quite the most-charming piece of music on the disc, and I wonder how Ms. Oppens would have scored in the competition. I would have given her an A.

After that is Kaleidoscope for Two Pianos (1959), again with Mr. Lowenthal accompanying Ms. Oppens. Corigliano calls it a "colorful mosaic of changing symmetrical patterns." He wrote it while he was an undergraduate at Columbia University, and it is full of pleasantly youthful energy, which Ms. Oppens seems happy to exploit.

The album closes with Etude Fantasy (1976), five etudes, piano studies, beginning with a rather forward statement from the left hand only. Things settle down thereafter, although the work contains just about everything you can think of before it comes to a vociferous climax, then falling off into silence in a graceful, melodious ending.

Recorded in December, 2010, at the American Academy of Arts and Letters, New York, the sound is most realistic. The miking seems perfectly judged to produce a piano tone that actually appears to be coming from a distance of the listener to the speakers, in my case about eight-to-ten feet. Clarity is outstanding without sacrificing nuance, warmth, or resonance. Impact is strong, and the piano size is lifelike rather than stretching across the room.

Email ThisBlogThis!Share to TwitterShare to FacebookShare to Pinterest
Labels: Corigliano