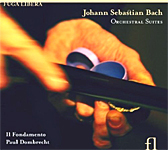 German organist and composer Johann Sebastian Bach (1685-1750) wrote a prodigious amount of material, but, surprisingly, only four orchestral suites, a French-influenced Baroque form much favored in his day. Recent research reveals that Bach wrote the four suites (or "overtures" as people sometimes call them, referring to their elaborate opening movements) during the years 1716-1723, later revising them between 1725-1739 in the arrangements we know best today.

I mention these revisions because conductor Paul Dombrecht takes a slightly different approach to the suites than other conductors do. There are about sixteen players involved in the performances, but the recording makes the ensemble sound a lot bigger, despite the fact that Il Fondamento play the suites in their original form without trumpet or timpani in Nos. 3 and 4 and a solo violin replacing the flute in No. 2. The composer appears to have added the other instruments later for reasons of greater pomp, ceremony, or solemnity. The music sounds fine without the later augmentations, if anything a tad more transparent than usual, although I confess I do miss the timpani.

Maestro Dombrecht founded Il Fondamento in 1989, he and his players dedicated to historical instruments and music practices of the eighteenth and nineteenth centuries. There are, of course, any number of period-instrument recordings that one might also enjoy, including those from the English Concert, the Academy of Ancient Music, Le Petite Bande, Boston Baroque, Amsterdam Baroque, and the like; however, the recording this one reminds me of most is that of Jordi Savall and Le Concert des Nations on the Astree label, at least in terms of playing style, if not in the distribution of instruments.

Starting with the Overture of Suite No. 1, we can see where this music-making is going. It can be stately and sedate one minute and sprightly and spirited the next. This was Bach's intention, of course, to contrast fast and slow movements, and slow and fast sections within movements, throughout the pieces. Suite No. 3, probably the most popular for its famous Air, shows Il Fondamento to best advantage, stylish and elegant.

The recording, made in 2010 at the Chapel of the Cloister of the Sisters of St. Vincentius a Paulo, comes up well, making, as I said earlier, the ensemble sound bigger than the relatively few players participating. Still, despite the big sound, the separate instruments stand out nicely, with each soloist given his or her fair share of distinct individuality, the group as a whole displaying plenty of clarity and air. The miking is close enough to capture a lifelike texture and presence yet distant enough to show off the resonant acoustic of the chapel.