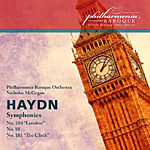 Austrian composer Joseph Haydn (1732-1809) visited England twice at the invitation of London impresario Johann Peter Salomon and Viotti's Opera Concerts, where he composed his final twelve symphonies, Nos. 93-104, two of which we get here, No. 101 in D Major, "The Clock," and No. 104 in D Major, "London." In addition, Philharmonia Baroque throw in No. 88 in G Major for good measure.

The program begins with No. 104 (1795), one of the composer's most popular works. It begins with a dark, heavy introduction that reminds one of music from Mozart's Don Giovanni. However, it soon enough gives way to a far more chipper tune, with Maestro Nicholas McGegan appearing at home in both moods. The conductor then takes the Andante at a leisurely yet stately pace, followed by the catchy syncopations of the Minuetto and the wonderfully spirited Finale.

Next, we get Symphony No. 88 (1787), two trumpets and timpani accompanying the second movement Largo in several surprising outbursts, an unusual arrangement in those days to say the least. Otherwise, this is a typically buoyant and melodic work, the Minuetto and Finale filled with verve and elan. As usual, McGegan judges every tempo and every contrast for utmost delight.

Finally, we have No. 101 (1794), subtitled "The Clock." Again Haydn prefaces the first-movement Adagio with a slow, somewhat somber introduction, soon followed by a sprightly Presto. The second-movement Andante gives the piece its title, the music ticking off the seconds in the manner of a clock. Here, McGegan perhaps takes the pace a little too quickly for the second hand of a timepiece, but it's certainly all in good cheer. The Minuetto and Vivace finale, more complex than they sound, come off as easily as everything else the Philharmonia Baroque play, which is to say with exquisite execution. You'd be hard pressed to find better, more fluid, more elegant, more stylish performances than these, especially on period instruments.

The Philharmonia Baroque recorded the symphonies between February, 2007, and September, 2009, live at First Congregational Church, Berkeley, CA. Well, I could have done without the "live" part, since I'm not a big fan of live recordings. Still, they miked this one closely enough that audience noises are seldom a factor. About the only serious drawback is the applause that erupts at the end of each symphony. Such recorded applause always reminds me of the laugh tracks in television sitcoms, unnecessary and annoying. In the future, I hope Philharmonia Baroque consider editing out the applause if they continue to release live recordings. Better yet, maybe they'll go back to making recordings without the distractions of an audience.

Anyway, the sound here is quite good, if not quite so smooth or natural as in their older Harmonia Mundi recordings. The church acoustic comes up well, providing a pleasant ambient glow to the music. While bass and treble might have been a tad better extended, the midrange is very clear, only a touch forward at times in the upper regions. There is also a very wide stereo spread involved, with a realistic orchestral depth, so the result is comfortable and rewarding.