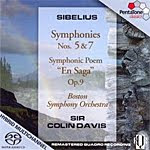 Truth to tell, I find the last few of Jean Sibelius's seven symphonies rather tiresome. They all begin sounding alike to me and repeating what the composer had already done in his first few symphonies. Frankly, I find his tone poem En Saga, included here, a far better, more meaningful, more colorful work than either the Symphony No. 5 or 7.

Of course, Sibelius would have lumped me into the category of those who simply didn't understand what he was up to. As he said, "Only a very few people in this world understand what I attempt and achieve in my symphonies. Most of them do not have a clue what it is all about."

But that's neither here nor there. The question is whether Sir Colin Davis in his stereo recordings of the works with the Boston Symphony are worthwhile interpretations, and here we must count them resounding successes. They certainly capture Sibelius's dark, forbidding, northern landscapes, his contrasts, his themes, and his variations in vivid detail. OK, maybe Davis's more-recent recordings with the London Symphony (RCA) do it even better by expanding and broadening the music further and being a tad more expressive, but these BSO interpretations (originally on Philips) will do nicely, too.

What a lot of people never realized about these Philips BSO recordings from the mid Seventies, though, is that the company miked them for potential quadraphonic playback, a technology they never eventually released to the home. Until now. PentaTone engineers have gone back to the four-channel tapes and present them on this hybrid SACD in ordinary two-channel stereo for playback on ordinary CD players and in four-channel Super Audio for multichannel systems using an SACD player. I don't have four-channel playback, but I did listen through an SACD player, finding the sound perhaps a touch clearer than from a regular Philips disc; it was hard to tell. Still, it's not as clear as Davis's later RCA recordings. Nevertheless, if you have the proper surround-sound equipment, you might want to give this disc your consideration.