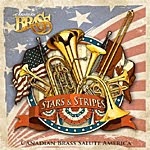 The Canadian Brass, one of the world's premiere musical ensembles, celebrate American patriotism in this album of prominent hymns and marches. They exhibit their usual spit and polish in performances that are, if anything, almost too refined.

Four additional players on percussion--drums and cymbals--augment the five regular members of the group. In the opening number, John Philip Sousa's "Stars and Stripes Forever," I thought they still sounded a bit thin for the material, my being more used to larger brass bands playing the march. But in most of the rest of the repertoire, they seem perfect. After all, they play tunes from Revolutionary War days ("Chester") through the Civil War ("Battle Hymn of the Republic," "When Johnny Comes Marching Home," "Dixie's Land") to the First World War ("Over There," "You're a Grand Old Flag"). The smaller number of instruments probably helps simulate how most bands of those eras would have sounded, especially when you consider that the drums used are replicas of actual drums of the years represented, as is the drumming technique.

After the Sousa march, we get a salute to the U.S. armed forces with "The Army Goes Rolling Along," "Anchors Away," "The Air Force Song," "Semper Paratus" ("Always Ready," Coast Guard), and "The Marine's Hymn." Again, I would have preferred a larger number of players, but the performances are so good, who cares?

Then we hear "The Star Spangled Banner," but not in a rendering we might easily recognize. It's the original 1814 Baltimore version. Wisely, the Brass follow it up a few tunes later with the more-familiar, updated arrangement.

Also along the way we get the customary nationalistic music we would expect, nay, demand of such a collection: "Shenandoah"; "Hail Columbia" ("The President's March," today the entrance march of the Vice President); "My Country, 'Tis of Thee"; the march "National Emblem," done up in high good spirits; and, of course, "America the Beautiful," which moved me almost to tears.

The Brass conclude the disc, appropriately for them, with the Canadian National Anthem, "O Canada," as "a gift to Americans." The whole album is quite stirring, and you might find yourself at times wanting to stand up and cheer, or at least sing along.

The recording, made in April, 2010, helps matters considerably, too. The sound displays plenty of stage depth, with a solid dynamic punch and a deep bass that comes over with gut-thumping authority. We also get an excellent frequency response, neither too forward nor too recessed, with a top and bottom well balanced with the midrange. In short, this is a great-sounding disc all the way around.