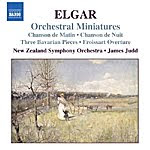 For listeners used to hearing only Sir Edward Elgar's big orchestral works--the First and Second Symphonies, the Pomp and Circumstance marches, the Enigma Variations, and the like--these orchestral miniatures might come as a delightful surprise. They may be short, but they are really quite sweet and enchanting.

Things begin with the Froissart Overture, written in 1890 and one of Elgar's first popular pieces. It has a nice, dashing swagger to it, inspired by some chivalric lines in a poem by Sir Walter Scott. Following that is a selection of tunes that remind one of the English romantic-pastoral tradition: May Song, Carissima, Three Characteristic Pieces, Chanson de Matin, and Chanson de Nuit. They are slow, lovely pieces with a certain quality of Delius about them.

The Romance for Bassoon and Orchestra is also charming, a work that exploits the poetic quality of the instrument. Then, things conclude in lively fashion with Three Bavarian Dances, which contrasts dramatically with the lyrical tone of most of the preceding pieces and provides a lively ending to the album.

Conductor James Judd makes the most of the music's varying moods, and he and his New Zealand Symphony Orchestra seem born to play the tunes. They treat the music affectionately, understandingly, generating a totally pleasant listening experience.

As for the sound, it is among the best I've heard from this company. For the first few minutes I listened, I thought it was perhaps a tad too forward in the upper midrange, but the ear adjusts, and it adds a bit to the disc's clarity overall. There is a fairly wide stereo spread to complement the proceedings, a good sense of depth, robust dynamics when needed, and an equally brawny bass drum. This 2006 recording, offered at a bargain price, provides more than its money's worth.