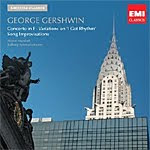 George Gershwin (1890-1937) burst onto the musical scene with his Rhapsody in Blue from 1924, a fusion of sophisticated orchestral music and American jazz, unique for the times. In the following thirteen years before his untimely death, he practically changed the way people would look at serious music forever, with the Concerto in F, An American in Paris, the Cuban Overture, the opera Porgy and Bess, and a whole series of film and Broadway show songs.

The first half of the disc under review, a 2010 reissue from EMI, consists of a succession of piano improvisations on Gershwin tunes. Pianist Wayne Marshall presents them sensitively, with a piano sound almost as delicate as the pianist's touch. Rather than offering rousing, overture-type pieces, especially to begin the disc, Marshall provides mostly ballad numbers like "I Loves You, Porgy," "They Can't Take That Away from Me," "Summertime" (understandably, the centerpiece of the collection), "Let's Call the Whole Thing Off," "Love Walked In," "By Strauss," and "Our Love Is Here to Stay."

Marshall takes none of the numbers in a particularly "jazzy" manner but, rather, reflects the more-thoughtful side of the works, most of which the composer wrote for shows and a couple for his opera. Marshall's approach to the music is reflective, contemplative, acute, yet often sensuous.

Gershwin wrote the I Got Rhythm Variations for Piano and Orchestra in 1934 for a concert tour celebrating the tenth anniversary of Rhapsody in Blue. Here and in the Concerto in F, the Danish Aalborg Symfoniorkester accompanies Marshall, with the pianist leading from the keyboard. Again, Marshall follows a serious, non-jazzy course with the music, with the percussion leading the way in the first few minutes of the Concerto.

Of course, the Concerto is a bit odd, anyway, the piano never quite dominating the proceedings the way you would expect it to. Then, to add to the novelty, Marshall plays the first movement piano parts at quite a healthy clip, which doesn't always lead to a lot of inner feeling, his moving so quickly. Yet he demonstrates some dazzling playing, and there is no question the Concerto is more lively, if not more exhilarating, than we usually hear it.

The second-movement Adagio is where the performance shines, though, very languorous and soulful in the trumpet section and then more breezy and buoyant when the piano enters. The final movement begins with a segment seemingly at odds with everything that went before it, more like a Rachmaninov concerto, until Marshall and the composer take us back to the work's initial mood.

The solo piano pieces, which EMI recorded in 1992-93, appear slightly subdued, the piano a little recessed. Fortunately, it suits Marshall's interpretations, which are subtle and refined. When he's joined by the orchestra in the Variations, recorded in 1994, and the Concerto, recorded in 1995, we find an excellent stage depth, good instrumental air, wide dynamics, quick transient response, and a reasonably deep bass. The orchestra itself seems a bit small, so there is an unusual degree of clarity on display, although at the expense of a somewhat thin sound.

At over seventy-seven minutes, the album offers good value for the money, even if Marshall's music-making may not be exuberant enough to light up everyone's listening room. This is Gershwin for folks who believe we should give the composer his fair due as a heavyweight in the music world, without sacrificing the joy that accompanies his compositions.