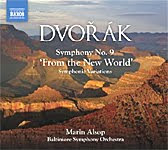 It's hard not to like Dvorak's final symphony, and because of its popularity as one of the most-beloved pieces of music in the world, the listener has a wide choice of recordings and interpretations from which to choose. Certainly, Marin Alsop's recording for Naxos with her Baltimore Symphony Orchestra must rank among the top contenders.

Czech composer Antonin Dvorak (1841-1904) wrote his ninth and final symphony, "From the New World," in 1893 while on a five-year stay in America as the director of the National Conservatory of Music. In the symphony, the composer combined elements of Native-American and African-American cultures, along with influences from his own Bohemian background, producing a classic that many people cherish among the best musical compositions ever created.

One can hardly knock any part of Ms. Alsop's reading. The opening movement has verve and snap. In the following Largo I can't remember hearing the cor anglais sounding more mournful. The Scherzo sparkles, and as its Molto vivace marking indicates, it has appropriate vivaciousness. Lastly, the Finale thunders to a close with great impact and high good spirits. All very nice. There are moments of transition that one might have hoped would be smoother, but overall it's a most satisfying performance.

Two other quibbles, though. First, the sound is a mite thick for my tastes. The coupling includes Dvorak's early Symphonic Variations, which because of their lighter scoring come off sounding more transparent. Second, the Naxos budget discs are creeping up in price, and a person can buy Istvan Kertesz's superb LSO versions of Dvorak's Eighth and Ninth Symphonies (1966 and 1963, respectively) coupled on a mid-price Decca Originals CD for just a few dollars more than the Naxos release. The Kertesz disc would be my number-one recommendation in these works regardless of price, so the Alsop Naxos recording definitely has tough competition.