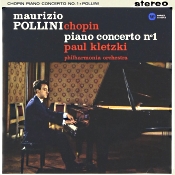 From LP's to CD's, I've owned this recording in one format or another almost since the day it came out in 1960. The last time I reviewed it was about ten years ago when EMI remastered it. Now, Warner Music Japan have remastered it yet again, this time in SACD. A good thing keeps getting better and better.

The mid Fifties and early Sixties saw the introduction of a remarkable number of great pianists, among them Alfred Brendel, Van Cliburn, Martha Argerich, Vladimir Ashkenazy, John Ogdon, Stephen Kovacevich, and others, including Maurizio Pollini. With the exception of Mr. Ogdon, who died relatively young, all of them have more than lived up to their potential. As I say, remarkable.

Anyway, the Random House Unabridged Dictionary defines "classic" as "a work of the first rank, esp. one of demonstrably enduring quality; an artistic production considered a standard; a work that is honored as definitive in its field; something noteworthy of its kind and worth remembering; one that is considered to be highly prestigious or the most important of its kind." One might easily apply all of those meanings to Maurizio Pollini's recording of Chopin's Piano Concerto No. 1 in E minor, Op. 11. The music is classic, the performance is classic, and the sound is classic.

Frederic Chopin (1810-1849) was only around twenty years old when he wrote his two Piano Concertos, writing the Concerto we know today as No. 2 before he wrote No. 1 but publishing it later, thus giving it the misleading number 2. So, if No. 1 seems more mature and has become more popular, it's because it wasn't Chopin's first attempt in the genre. And the reason I mention the composer's age when he composed the piece is because Pollini was only eighteen when he recorded it, shortly after he won the International Ettore Pozzoli Piano Competition in Seregno, Italy (1959), and the International Chopin Competition in Warsaw, Poland (1960). Youth serves youth.

In the first movement, Pollini is in equal measure poetic and heroic without an ounce of sappiness, a movement that comes through all the more powerfully for its straightforwardness. When Pollini executes the famous main theme, it, too, flows effortlessly with a gentle, expressive, unforced charm. I suppose you could call it a restrained passion, which makes it all the more passionate.

Chopin himself described the second movement Romanze as "...calm and melancholy, giving the impression of someone looking gently towards a spot which calls to mind a thousand happy memories. It is a kind of reverie in the moonlight on a beautiful spring evening." Such is Pollini's interpretation, which lingers dreamily in the moonlight as much as any other account, the pianist striking every note with uncluttered assurance and conveying a mood of unlimited tranquility. Pollini floats the melody along in the most lyrical possible manner, yet never drawing attention to anything but the music.

Finally, in the closing Rondo Vivace, Pollini produces an interpretation both playful and vigorous, his unaffected technique dazzling and persuasive.

Producer Victor Olof and engineer Douglas Larter of EMI Records recorded the Concerto in April 1960 at Abbey Road Studio No. 1, and Warner Music Japan remastered it in hybrid Super Audio CD (SACD) in 2016. Although the sound remains two-channel stereo, it gains a degree of impact and range from the new processing, and I for one welcome any improvements to an already good thing.

On either a regular or SACD player, the sound of the Concerto is remarkably strong, clear, robust, and dynamic for its age (or for any age). The piano sparkles, well focused and crisply defined. The orchestral support spreads out behind the piano like an extension of the solo instrument itself, with respectable transparency, air, and depth. In SACD the sound is slightly more dynamic, with more impact and slightly better definition. One can also hear the difference from a regular CD player, but it isn't quite as evident. In any case, I doubt than anyone could tell the difference who didn't play the CD and SACD versions of the recording side by side and level matched as I did, and even then, as I say, the distinctions are still relatively minor. I could not in all conscience recommend that anyone who already owns the recording on CD buy the newer remastering unless one has very deep pockets or is really obsessive about sound, as I admit I am.

Should I also mention that this recording of the Concerto is about my absolute favorite recording of anything, anywhere, any time? It is perfect.