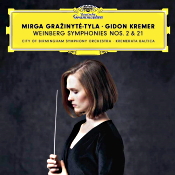 Occasionally a recording comes along that completely changes your opinion of a composer and his or her music. This new two-CD set has recently and rather startlingly done that for me in the case of Polish composer Mieczyslaw Weinberg (1919-1996). Mind you, it was not that I did not care for his music, but rather that I had always found previous recordings of his music to be OK, but never any better than that. I always felt a sense of disappointment. I had wanted his symphonies and other orchestral works to sweep me off my feet the way that the symphonies of Mahler and Shostakovich had when I first heard them, but it just never came to pass.

To be honest, I was not immediately impressed when I played the first disc of this two-CD set, his Symphony No. 2, a string symphony here performed by Gidon Kremer and his Kremerata Baltica. It struck me as, well, OK, but that was about it. Given my underwhelmed reaction to the first disc in the set, it took me another day to muster enough enthusiasm to audition the second disc.

What a difference a day makes! Twenty-four little hours later, I found myself fascinated by Symphony No. 21 "Kaddish" (the term refers to a Jewish prayer), which is played by the combined forces of Gidon Kremer and Kremerata Baltica plus the City of Birmingham Symphony Orchestra, all under the direction of conductor Mirga Gražinyte-Tyla. Here was a piece that reminded both of Mahler and Shostakovitch in its intensity of expression and sometimes chamber-music-like employment of orchestral forces. Having been so impressed by No. 21, I made a determination to listen to both symphonies over and over again, and so I did -- in my car, my living room, and in my listening room. The more I listened, the more my appreciation grew – not just for No. 21, but also for No.2, another truly remarkable work.

The first movement of Symphony No. 2, marked Allegro Moderato, opens lyrically, but soon you begin to feel a bit of an edge underlying the pleasantness. Kremer's violin weaves in and out of the sonic tapestry, and as the movement continues, the mood becomes reminiscent of some of Shostakovitch's music with its skittishness and underlying tension. The movement, which in some ways resembles a miniature symphony on itself, becomes agitated and ends abruptly, followed by the second movement, marked Adagio, which opens with a plaintive melody. The movement becomes more serious and reflective as it goes along, finally ending in a whisper. The third movement, marked Allegretto, returns to a mood more like the first movement, building up tension with repeated motifs as the music becomes more and more intense but then again ends in a whisper.

As for Symphony No. 21, violinist Kremer, who has played and recorded much of Weinberg's music over many years, remarks in the liner notes that "it was actually as if one had discovered Mahler's Eleventh Symphony. A musical monument that sets to music one of the greatest tragedies of the 20th century." Conductor Gražinyte-Tyla notes of the work that it poses a special challenge to both the orchestra and the conductor. "It is hard to string this enormous bow. The reason is that long passages are dominated entirely by a solo voice and various chamber ensembles while the gigantic orchestral apparatus of almost 100 musicians sits on the stage… the deeper we dive into the music, and the more closely we study this work, the more beautifully it begins to radiate."

The symphony is constructed as one giant movement, with six sections marked but flowing into each other without pause. As Gražinyte-Tyla remarked, there are many instances featuring small groupings and soloists playing prominent roles, including violin, clarinet, piano, double-bass, and in the closing minutes, a soprano voice – surprisingly, that of Gražinyte-Tyla herself. But there are also passages featuring boisterous contributions from brass, percussion, woodwinds, and strings. Under Gražinyte-Tyla's direction, it all hangs together beautifully, and has been captured in splendid sound by the engineering team.

As I stated at the outset, there are recordings that make you change your opinion of a composer. Having been so entranced by this remarkable recording of these two splendid symphonies, I plan to seek out more recordings of Weinberg's music to see what further treasures I might be able to unearth. Ah, the joys of music!

Email ThisBlogThis!Share to TwitterShare to FacebookShare to Pinterest
Labels: Weinberg