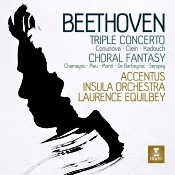 The good news: The conductor, the orchestra, the chorus, and, of course, the music are all excellent.

The bad news: Erato chose to record the music live.

The conductor is Laurence Equilbey, a French music director of some renown in both the choral and orchestral fields. She founded the chamber choir Accentus in 1991 and here leads the Insula Orchestra, with which she is also the artistic and musical director.

Although the Triple Concerto gets top billing on the album cover, the program begins with the Choral Fantasy (more formally, the Fantasia for piano, vocal soloists, chorus, and orchestra), Op. 80, which Beethoven wrote 1808. The composer premiered it with himself as soloist in a concert with his Piano Concerto No. 4, his Symphonies Nos. 5 and 6, and excerpts from his Mass in C major. That was surely a concert for the ages, and Beethoven wanted the Choral Fantasy to conclude the event, utilizing all the performers assembled. The soloists on the current album are Bertrand Chamayou, piano; Sandrine Piau, soprano; Anaik Morel, alto; Stanislas de Barbeyrac, tenor; and Florian Sempey, baritone; along with the Accentus choir and Insula Orchestra. Ms. Equilbey's performance may not live up to Beethoven's extraordinary occasion, but it's quite nice in any case.

The Insula Orchestra play on period instruments, which is a major plus in terms of my taste, and both pieces of music use a period Pleyel piano from 1892, which Ms. Equilbey says is a good compromise between the fortepiano of Beethoven's time and today's modern instruments. In any case, the music they make is pleasant, not harsh, brash, or soggy. More important, Ms. Equilbey keeps the generally genial mood of the piece moving smoothly and energetically, with both grace and charm. While it's true it zips along in the tradition of historical performances, it maintains a proper decorum. In other words, there is nothing stodgy about the reading, and its relationship with the composer's later and more-celebrated Ninth Symphony is more evident than ever.

Following the Choral Fantasy we get Beethoven's Triple Concerto (more formally, the Concerto for Violin, Cello, and Piano in C major), Op. 56, written in 1803, several years earlier than the Choral Fantasy. It's the only concerto Beethoven composed for more than one solo instrument. The soloists are Alexandra Conunova, violin; Natalie Clein, cello; and David Kadduch, piano, with Ms. Equilbey and the Insula Orchestra. Ms. Equilbey's rendition would have to be splendid, indeed, to compete with something like the star-studded cast of EMI's recording with David Oistrakh, violin; Mstislav Rostropovich, cello; Sviatoslav Richter, piano; Herbert von Karajan and the Berlin Philharmonic (on EMI, Warner Classics, and remastered by JVC for Hi-Q). In any case, Ms. Equilbey's account is also quite nice.

Again, Ms. Equilbey keeps a strong forward momentum going, and the soloists intertwine effortlessly within the orchestral context. They maintain a reasonably balanced dialogue with the orchestra, although the piano tends to get a little drowned out at times by the other two instruments. Equilbey takes the slow central movement at an appropriately reflective gait, and Ms. Clein's cello sounds delightfully lyrical and not a little melancholy. The finale bursts forth with radiant beauty, perhaps more courtly and gracious than completely joyous but fitting in with the mood of the preceding movement.

Producer Laure Casenave-Pere and engineer Thomas Dappelo recorded the music live at the auditorium of La Seine Musicale, Boulogne, France in May 2017 and February 2018. As we might expect, the miking is fairly close, giving instrumental soloists an in-your-lap appearance. What's more, there's not a lot of depth to the orchestra nor much sense of ambience in the hall. When the chorus joins in, they sound a bit too strident for my ears. Fortunately, the sound is fairly clean, with clear definition and strong dynamics. The engineers have thankfully reduced audience noise and edited out any applause.