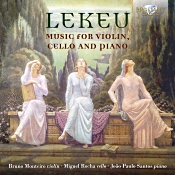 Another name, Guillaume Lekeu (1870-1894), unfamiliar to me until now, was a Belgian composer who might have gone on to write a lot more good music if he hadn't died relatively young. He studied counterpoint and fugue with Cesar Franck and orchestration with Vincent d'Indy before contracting typhoid fever and dying the day after his twenty-fourth birthday.

On the present album Portuguese violinist Bruno Monteiro and his friends, cellist Miguel Rocha and pianist Joao Paulo Santos, play two of Lekeu's more celebrated chamber pieces. But first, I may need to remind you of just who Mr. Monteiro is. According to his biography, Monteiro is "heralded by the daily Publico as 'one of Portugal's premier violinists' and by the weekly Expresso as 'one of today's most renowned Portuguese musicians.' Fanfare describes him as having a 'burnished golden tone' and Strad states that his 'generous vibrato produces radiant colors.' Music Web International refers to his interpretations as having a 'vitality and an imagination that are looking unequivocally to the future' and that reach an 'almost ideal balance between the expressive and the intellectual.' Gramophone praises his 'unfailing assurance and eloquence,' and Strings Magazine says he is 'a young chamber musician of extraordinary sensitivity.'" So expect extraordinarily good performances.

The program begins with the Sonata for Violin and Piano in G, which Lekeu premiered in Brussels in 1893 to enormous success. According to Wikipedia, Lekeu's style was "prophetic of early-twentieth-century avant-garde French composers like Satie and Milhaud" and "influenced by Franck, Wagner, and Beethoven, though these influences did not manifest themselves as mere imitation." Whatever, the music's most obvious characteristic is its melancholy. Perhaps it was presaging his own early death, but I seriously doubt it.

There is a brief moment of cheer within the first of the Sonata's three movements, but for the most part the piece is melodic, lyrical, and, as observed above, not a little mournful. Monteiro appropriately plays the work in a most sympathetic manner, his violin sounding soulful and yearning, the piano accompaniment forceful but never interfering with Monteiro's splendidly forthright and emotionally affecting interpretation. While the third movement is clearly more animated than the others, particularly in the first section, the composer going out on a swirl of notes so to speak, the music nevertheless maintains the same mood of tempered sadness we see throughout. And Monteiro is careful to sustain that tone to the end. In all, it's a lovely piece, and Monteiro and Santos show their appreciation with a delicately wrought performance.

The second item on the agenda is the Trio for Piano, Violin and Cello in C minor, which dates from 1890 and as Monteiro notes is "free from Franckian and Wagnerian influences and more inclined toward Beethoven." Still, Lekeu appears to have struggled writing it and was not especially pleased with the work (he complained of "an overly disciplined and broken discourse"). Whatever, Monteiro and his friends play it with a full measure of fluid grace, sophistication, and brilliance, never sentimentalizing the plush harmonies.

Producer Bruno Monteiro and engineer Jose Fortes recorded the music at Igreja da Cartuxa, Caxias, Portugal in June and July 2018. The violin has a sweet, decorous tone, and its miking sets it back far enough to benefit from the room acoustics. The overall sound for the three instrumentalists is warm and smooth as well, with a natural presence, the several instruments together in excellent balance.

Email ThisBlogThis!Share to TwitterShare to FacebookShare to Pinterest
Labels: Lekeu