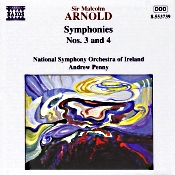 English composer Sir Malcolm Arnold (1921-2016) continued to write symphonic music until 1990, when he abruptly stopped, saying he "had done enough." All the while a stubborn Romanticist, Arnold wrote music that steadfastly employed melodies and rhythm at a time when Modernists had shut the door on such anachronisms. Coincidentally, I had written about this same coupling of Arnold's Third and Fourth Symphonies about a year earlier, that time under Vernon Handley on the Conifer label. Now the two symphonies return on a lower-priced Naxos disc that is even more inviting.

The Third Symphony (finished in 1957), divided into three movements, is the least consequential of the two works on the disc. It is pleasant enough, don't get me wrong, but not particularly memorable.

The Fourth Symphony (1960), however, will remain in memory, especially for its opening movement, with its overlays of South and Central American percussion tunes. The Vivace ma non troppo that follows also uses a jazzy tune, but slightly more formally structured. The Andantino is the calm before the storm, the end of the finale bursting forth in a most provocative and, as the composer said, "completely crazy" manner.

On a side note, the composer later wrote that the Fourth Symphony was his response to the  1958 Notting Hill race riots. He was, he said, shocked that such a thing could happen in England, and he hoped that his symphony might help to diffuse the problems of racial divide.

The Naxos sound is clear and well defined, easily rivaling the more expensive Conifer disc. Maestro Penny recorded the Third and Fourth Symphonies in June 1996, with the composer in attendance. One could hardly ask for more authoritative readings. In fact, they are among the best Naxos recordings I've heard, so one can hardly go wrong with them.

The sense and value of purchasing low-to-middle priced Naxos releases should be self evident, at least in principle. However, I would add that not all Naxos recordings sound as good as this one, because on the same day I listened to the Arnold disc I also happened to listen to a recording of the Mozart Horn Concertos (Naxos 8.553592) that I found stodgy in performance and dark and murky in sound. Listening before you buy is still the best way to acquire what you are most likely to want to live with; trusted reviews and the recommendations of friends are obviously other good practices. Buying indiscriminately, though, even in so fine a label as Naxos, may cause too many, if occasional, disappointments.

No letdown in these Arnold symphonies, though. I applaud them strongly.

Email ThisBlogThis!Share to TwitterShare to FacebookShare to Pinterest
Labels: Arnold.Malcolm