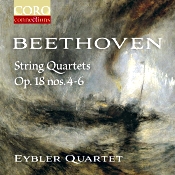 It's probably best to start by reminding you that the Eybler Quartet is a unique group of musicians who play historically informed performances on period instruments. Their Web site describes them as coming "together in late 2004 to explore the works of the first century of the string quartet, with a healthy attention to lesser known composers such as their namesake, Joseph Leopold Edler von Eybler. The group plays on instruments appropriate to the period of the music it performs. Violinist Julia Wedman and violist Patrick G. Jordan are members of Tafelmusik Baroque Orchestra; violinist Aisslinn Nosky is concertmaster of the Handel and Haydn Society and Principal Guest Conductor of the Niagara Symphony Orchestra; Aisslinn and Julia are also members of I FURIOSI Baroque Ensemble. Cellist Margaret Gay is much in demand as both a modern and period instrument player. The group brings a unique combination of talents and skills: years of collective experience as chamber musicians, technical prowess, experience in period instrument performance and an unquenchable passion for the repertoire."

As of this album, the Eybler Quartet has six albums to their credit, mostly music of Haydn, Mozart, Vanhal, Backofen, and their namesake, the Austrian composer and conductor Joseph Eybler (1765-1846). Here, the Eybler ensemble present volume two of Beethoven's String Quartets, Op. 18, Nos. 4-6, having already done a splendid job with Nos. 1-3. As I said about the group before, if you like chamber music and you like Beethoven, there's plenty of both around, but to hear these early Beethoven quartets played in something approaching what Beethoven himself might have heard (which, given his deteriorating hearing isn't saying a lot), the Eybler group is hard to beat.

Of the sixteen string quartets Beethoven wrote, the six in Op. 18 are the earliest, published in two volumes in 1801, about the time he wrote his Symphony No. 1. He wrote Nos. 4-6 between 1798 and 1800. They are each in four movements, although the movements vary in timing and style from quartet to quartet. Much of the material for the Nos. 4 and 5 Beethoven based either on his own previous compositions or modeled after Mozart, with No. 6 perhaps the most original of all.

Quartet No. 4 projects a sweet youthful bounce together with a more serious almost-operatic gravitas that the Eyblers capitalize on nicely. Beethoven's tempo markings indicate some lively (if pre-metronome) speeds, which the Eyblers are happy to provide. Yet they never sound rushed or frenetic and are quite refreshing throughout. The Eybler's articulation is always crisp, their interactions accomplished, and the sound of their instruments pleasantly agreeable. And did I mention that all four musicians sound virtuosic? They are.

Quartet No. 5 is even sunnier than No. 4, and the Eyblers appear to take great delight in it. There is a fair amount of interaction among the instruments in the second-movement minuet, and it's fun hearing the Eyblers intermingling of voices. The slow-movement theme and variations takes top honors, though, for its sheer inventiveness, and it's hard not to remember it above everything else in the piece.

Quartet No. 6 is maybe the most reminiscent of Mozart's tunes in its first few minutes with allusions to Figaro before going off in different directions. It's certainly the most obvious in its diversity, too, varying from blusteringly comedic to elegantly refined, and from fleetingly quick to serenely contemplative. The Eyblers handle all of these contrasts with relative ease and make everything about Beethoven seem to sparkle anew. They're a joy altogether.

Producer Dan Merceruio and engineer Ron Searles recorded the music at the Glenn Gould Studio, Toronto, Ontario in October 2016. As with their previous Beethoven album, the sound is among the best I've heard in a small-group performance. And as with the previous album, this one is slightly close for my taste, the four performers widely spaced across the sound stage. Otherwise, the sonics are nicely detailed without being bright, hard, or edgy. Indeed, they are quite realistic in their presence, with good dynamics, impact, and definition. It makes for a pleasurable listen.