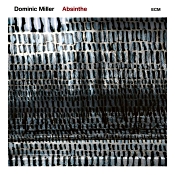 One glance through the lineup of musicians and you are probably already wondering why this CD is being reviewed in Classical Candor, but trust me, I can give you a couple of good reasons. First, if you want to immediately classify this as a jazz recording, please note that several other jazz recordings have been reviewed on this site. Second, and more importantly, Dominic Miller's Absinthe has a chamber-music sensibility to it that lends itself quite well to being taken seriously as quite akin to what we like to think of as "classical" music. I truly believe that many folks who listen primarily to classical music would find this recording involving and enjoyable.

All of the compositions on Absinthe are by Dominic Miller, who writes in the liner notes that he was inspired by Impressionist art, adding that "musically the influences come from the usual sources: Bach, Beatles, etc. Pointless trying to explain music but when you have an idea or concept the music kind of writes itself." Miller, an Argentina-born guitarist who has long been a member of Sting's road band, plays acoustic guitar on Absinthe. His previous album for ECM, Silent Light, was essentially a solo guitar outing, accompanied on a few cuts by some subtle percussion, but Absinthe reveals him not only as a fine guitarist, but also an excellent composer. You might expect an album headed by a guitarist to feature blistering guitar solos, but that is not the case here.  The accent instead is on subtle interplay among the assembled musicians.

That mood of interplay is evident from the very first cut, the title cut, which opens with some soft picking on the guitar, then some colorful cymbal splashes, some sweet sounds from the bandoneon, and then the drums and bass kick in, with some subtle seasoning from a synthesizer as the tune rolls on. Miller explains in the liner notes that he thought the pure, expressive sound of the bandoneon (a cousin of the accordion, originally invented in Germany but nowadays most associated with tango music from Argentina and Uruguay – think Astor Piazzolla or Dino Saluzzi) would be appropriate for the musical vision he had in mind.

As the album continues, Miller's guitar and Arias's bandoneon spin some delightful melodies, but Lindup on synths (especially on the cut, "Mixed Blessing") and even Fiszman on bass (check out his subtly melodic picking on the cuts "Verveine" and "Christiana") get a chance to add to the magic, while drummer Katché (a remarkably inventive drummer who has played as both sideman and leader on numerous ECM albums) provides drive and seasoning throughout the ten cuts. The net result of this collaborative musical interplay is an album that truly does sound like a form of chamber music, a jazz album that lovers of classical music might well discover to be an unexpected delight should they be adventurous enough to give it an audition.

The ECM label has long been highly regarded for its excellent sound quality: well balanced, smooth, and clear. All things considered, then -- and I'm sure some of you saw this groaner coming -- Absinthe makes the heart grow fonder.

Email ThisBlogThis!Share to TwitterShare to FacebookShare to Pinterest
Labels: Miller