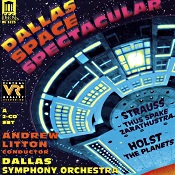 This double album is titled "Dallas Space Spectacular," a designation based on a tenuous connection between Richard Strauss's Thus Spake Zarathustra and the film 2001: A Space Odyssey. Because director Stanley Kubrick used Strauss's "Sunrise" Introduction to Zarathustra several times in his 1968 film, I suppose the piece will forevermore be referred to by the general public as "space" music. So be it.

In any event, on the set under review I preferred Andrew Litton's interpretation of Zarathustra to his more hurried performance of Gustav Holst's The Planets. His Zarathustra has real weight and body to it, with the big dramatic climaxes resounding with emotion. Most of Litton's Planets, however, seem like they're spinning crazily out of orbit. Maybe they're rushing to face some unknown cosmic appointment that we don't know about, or maybe Litton himself was rushing to keep a dinner date.

Delos recorded the sound in what they called at the time (1998) "Virtual Reality," actually Dolby Pro Logic. It sounds just fine in normal two-channel stereo, but played over a surround-sound system with a center and rear speakers, it is supposed to exhibit enhanced spatial qualities. I tried it in both of my sound systems--in my main, living room system, which uses two, large bi-amplified speakers and in my home theater system located in an adjacent room, which uses seven smaller speakers, a bass woofer, and a Denon 7.1 receiver. The recording sounded best in two channel, not just because the living room speakers are better but because with 7.1 speakers the Dolby Pro Logic matrix fed too much information to the center and rear channels. Frankly, I wasn't about to readjust the levels of the center and rear speakers to accommodate the recording, as a matter of principle. I have yet to hear one of these surround-sound recordings that didn't need some sort of volume adjustment in one or more speakers, and even then I have never been fully satisfied with the sound. I know some people say that Pro Logic was meant only for movie soundtracks, not for the reproduction of music, and I see their point.

Anyway, in two-channel, as I say, it sounded fine. Compared to several other Zarathustra recordings (EMI, Newport Classic Auricle, Philips, DG, and JVC/RCA), however, the Delos sound had less depth, less transparency, and less deep bass. My reference Planets (Hi-Q/EMI), also sounded better than the Delos, with greater depth and clarity. My conclusion, therefore, is that the comparison recordings are better, even if a couple of them are costlier.

Still, you will find nothing to dislike about Delos's sound, either, and Litton's performance of The Planets may even grow on you. So if the set's combination of titles appeals you, there is no serious need to hesitate.