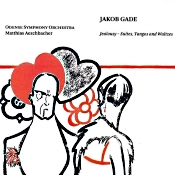 When I first started listening to this album, I expected mainly to enjoy one of the most popular tangos ever written, "Jalousie." What I did not expect was to find some of the best audio I'd heard in quite a long while.

Originally released on the Marco Polo label (now issued by Dacapo), the engineers recorded the music fairly close up yet with plenty of bloom. The middle section of the ensemble displays good depth, as a typical orchestral setup would, while the stereo spread to the sides is quite wide. The disc was a part of a Marco Polo series called "Danish Light Music," and while the musical content might be relatively lightweight, there is obviously nothing light about the arrangements or sonics.

Anyway, the Danish violinist and composer Jacob Gade (1879-1963) wrote his famous tango, "Jalousie 'Tango Tzigane,'" in 1925 as part of the musical accompaniment for the silent film Don Q: Son of Zorro. According to Wikipedia, "The composer claimed that the mood of the piece had been inspired by his reading a sensational news report of a crime of passion, and 'jealousy' became fixed in his mind."

Here, Maestro Matthias Aeschbacher and the Odense Symphony Orchestra take it at a more graceful gait than I have heard it done before, and there is less edge to it and more nobility than I would have thought possible. In fact, they make it sound quite grand in this big, flowing rendition.

The album includes a second tango by Gade called "Romanesca," one he wrote in 1933, a few years after "Jalousie." It, too, is quite good, but it never achieved the attention of the earlier work. Still, Aeschbacher gives it due attention.

In addition, the collection contains other Gade works, like "Leda and the Swan," a short ballet; "Rhapsodietta," "Wedding at Himmelpind," "Valse Capriccio," "Copenhagen Life Waltz," and "Douces Secrets Waltz." Most of these pieces receive their première recordings here, and all of them are equally charming.

This is a surprising and highly recommendable disc.

Email ThisBlogThis!Share to TwitterShare to FacebookShare to Pinterest
Labels: Gade