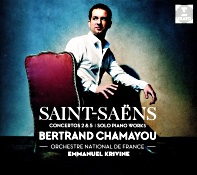 French composer, conductor, organist, and pianist Camille Saint-Saens (1835-1921) wrote five piano concertos. Of the five, the Second and Fifth are probably the most famous, which, by no coincidence, is what we have on the present disc, played by French pianist Bertrand Chamayou, accompanied by French conductor Emmanuel Krivine and the French National Orchestra, and recorded by the French record label Erato. You might say it's all-French affair.

Saint-Saens wrote the Piano Concerto No. 2 in G minor, Op. 22 in 1868, and, as I say, it remains among the most-popular of his piano concertos. Oddly for a modern concerto, Saint-Saens begins the work with a relatively slow movement, followed by a faster second movement that resembles a scherzo, and finishes with a very quick Presto. These mercurial tempo changes prompted the Polish pianist and composer Zygmunt Stojowski to joke that the piece "begins with Bach and ends with Offenbach."

I should tell you here that up until hearing Chamayou my favorite recordings of the concertos have been with Jean-Philippe Collard on EMI/Warner Classics, as well as Stephen Hough on Hyperion. Now I have to reconsider those top choices, at the least adding Chamayou to them. His dazzling, detailed finger work in the opening section of No. 2 is hard to resist from the start. He then goes on to produce more excitement than most other pianists combined in this work, if not quite as much lyrical beauty. In all, I'd give Collard the nod in poetry and Chamayou the edge in warmth and fervor.

Piano Concerto No. 5 "Egyptian" Saint-Saens wrote in 1896, some twenty years after his fourth piano concerto. It has the nickname "Egyptian" because the composer wrote it in Luxor, Egypt, and because the music is among his most exotic, displaying Spanish, Asian, and Middle-Eastern influences. Saint-Saens explained that the music represented a sea voyage.

The opening Allegro alternates between slow and fast segments; the central Andante begins with an introductory blast before settling into its more lyrical section; and the piece ends with an energetic Molto Allegro, the opening of which simulates the sound and feeling of a paddle-wheel boat up the Nile.

As with the Second Concerto Chamayou is consistently faster than most of his rivals, sometimes surprisingly so. If you regard Saint-Saens as a master of dramatic contrasts, juxtaposing sections of sheer, luxuriant composure with passages of intense, almost riotous passion, then Chamayou's interpretation should appeal to you. It did to me.

Producers Daniel Zalay and engineer Catherine Derethe recorded the concertos at the Auditorium, Radio France, Paris (concertos) in December 2017 and April 2018. Producer Vincent Villetard and engineer Catherine Derethe recorded the solo pieces at the same location as the concertos in April 2018. The clarity of the piano is superb, among the best I've heard. Moreover, in the concertos the engineer integrated the piano fairly well with the orchestra instead of the soloist being a mile out in front. The orchestral accompaniment is also nicely transparent, without being too strident or hard. The whole affair is miked a trifle close for my liking, but it's a minor concern and no doubt accounts for the recording's excellent clarity. Because of the closeness, too, there is not quite so much natural hall resonance present (for some reason more noticeable to me in the Second Concerto than the Fifth), but again it's a small price to pay for the overall lucidity of the production.