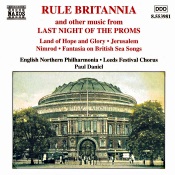 The Naxos disclaimer reads, "This is a recording of music performed frequently at the Last Night of the Proms, but not of the event itself." Just so you don't think you're getting an actual live Royal Albert Hall performance as traditionally recorded by other labels.

Nevertheless, the music is thoroughly English in spirit, and the disc represents a good value in popular chauvinistic English music. The program starts with Walton's "Crown Imperial," then goes on to what is practically England's second national anthem, "Jerusalem." It continues with the centerpiece of the collection, Sir Henry Wood's "Fantasia on British Sea Songs"; and it concludes with Elgar's "Pomp and Circumstance March No. 1."

In between these works are other pieces by Elgar, Arnold, Parry, and Walton. Maestro Paul Daniel, the English Northern Philharmonia, and the Leeds Festival Chorus play the music with great enthusiasm, if not in so grand a manner as those recordings by Sir Adrian Boult or Sir John Barbirolli. But the music is so stirring and patriotic, it practically makes even a non-British citizen want to stand up and cheer.

The sound Naxos provides is very wide ranging, with good transient impact and a decent depth of field. It is a little thick around the middle, though; not so transparent as the aforementioned Boult or Barbirolli performances on older EMI recordings. The bass is deep enough but not particularly well defined. Ensemble performance and overall tone are not so resplendent as the Philharmonia or London Philharmonic, either, but for the cost of the disc it is quite a reasonable compromise. For the Henry Wood medley itself the disc is worth the price.