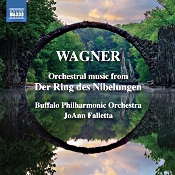 Since entering the musical stage in the late 1970's, JoAnn Falletta's reputation and popularity have grown in prominence. Today, she is the musical director of the Buffalo Philharmonic, a post she has held for twenty years, as well as director the Virginia Symphony, and she has, remarkably, recorded over seventy albums, mostly for the Naxos label.

Eventually, we knew she'd have to get around to recording Wagner, and on the current disc she offers orchestral music from all four of Der Ring des Nibelungen's music dramas: Das Rheingold, Die Walkure, Siegfried, and Gotterdammerung. If you enjoy Wagner's symphonic music from The Ring but haven't the patience to sit through the lengthy vocals parts, Ms. Falletta's handling of these scores is about as good as any.

Things begin with Das Rheingold and the "Entrance of the Gods into Valhalla." It's grand, glorious music, setting the tone for the rest of the album. Ms. Falletta uses it as a kind of overture. It gets our attention and heightens our expectations. And her Buffalo players are up to the task; they may not yet be in the sphere of a Berlin Philharmonic, but they are a first-rate ensemble.

Next, we get two items from Die Walkure: "The Ride of the Valkyries" and ""Wotan's Farewell" and "Magic Fire Music," both arranged by W. Hutschenruyter. Needless to say, the "Valkyries" music is among the most famous in all the classical repertoire. If you're old enough, you may remember Elmer Fudd singing "Kill da Wabbit" in the 1957 Looney Tunes cartoon "What's Opera, Doc," or perhaps you'll recall Colonel Kilgore (Robert Duvall) blasting the tune from his helicopters in Francis Coppola's 1979 war film Apocalypse Now. Ms. Falletta imbues the "Valkyries" music with the proper energy it requires and goes on to invest "Wotan's Farewell" and "Magic Fire Music" with plenty of color, power, and vitality.

After those items is the lovely "Forest Murmurs" from Siegfried, arranged by H. Zumpe. Here, we get Wagner at his most picturesque, a short tone poem depicting the pastoral beauties of nature. Ms. Falletta does it justice, and, in fact, it is probably the highlight of the disc for me. Her gentle touch and careful phrasing bring the woods to life as well as any conductor I've heard.

Of course, there are any number of good recordings of Wagner's orchestral music from The Ring. I especially like Georg Solti and the Vienna Philharmonic (Decca), Leopold Stokowski and various orchestras (RCA, HDTT), Erich Leinsdorf and the Los Angeles Philharmonic (Sheffield Lab), Otto Klemperer and the Philharmonia Orchestra (EMI-Warner Classics), and Antal Dorati and the National Symphony Orchestra (Decca), among others. JoAnn Falletta and the Buffalo Philharmonic can hold their head high in this august company.

Producer and engineer Tim Handley recorded the album at Kleinhans Music Hall, Buffalo, New York in May 2017. The sound is a little better than usual for Naxos--clearer, sharper in its details, and better imaged. Typically, the Naxos sound can be rather ordinary, even soft and fuzzy sometimes. Here, it is well defined and moderately dynamic. It is maybe a bit too bright and sometimes slightly harsh in the lower midrange; fortunately, however, such moments are infrequent. It's also a tad narrower across the sound stage than I would have expected, but it compensates with a good depth of field. Overall, the recording serves the music reasonably well.