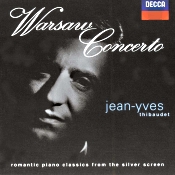 The movies have forever used classical music as themes and background, from the earliest silent films and their piano and organ accompaniment to today's big-screen, multichannel blockbusters. Stanley Kubrick practically revived the entire classical-music scene with his groundbreaking films. But of the five items on the Decca disc under review, only the ersatz Warsaw Concerto was written directly for a film, Dangerous Moonlight, in 1941. All the other pieces derive from existing classical material.

French pianist Jean-Yves Thibaudet plays all of the music almost painfully romantically, yearningly, wistfully, rapturously, if not always so forcefully as you might find elsewhere. The Rachmaninov Adagio, for instance, lacks much fire in spite of its ecstatic nature. The orchestras, Cleveland under Vladimir Ashkenazy for the Rachmaninov selections and the BBC Symphony with Hugh Wolf for the others, play in lush, gushing accompaniment. It's all appropriate for the temperament of the compositions, so I'm not complaining, you understand.

In the early days of digital recording, critics complained of too much brightness, hardness, and edginess in the sound. By the Nineties or so, however, record companies had gone out of their way to produce just the opposite, often erring in the direction of too soft a focus. I suppose the works on this disc, recorded between 1994-98, benefit psychologically from the big, warm sound Decca provides them, but the sonics aren't always as clear as an audiophile might like.

The Warsaw Concerto, as an example, receives a far more incisive and transparent rendering from Daniel Adni on EMI's "Classics for Pleasure" label, and Ashkenazy's own, earlier analogue discs with Andre Previn are more lucid (and more heartfelt) than these. Still, if one's audio system tends toward the upper frequencies, as many of today's movie-oriented speakers do, these performances might just compensate. Otherwise, this remains a good collection of mood music, better played and certainly better written than most of what passes for theme music in a lot of today's movies.