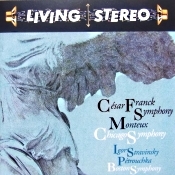 To say that these interpretations are authoritative would be an understatement. Maestro Pierre Monteux performed the Franck Symphony in D Minor probably more so than any conductor before or since; and he premiered the Stravinsky Petrouchka in 1911. These recordings, from 1961 and 1959 respectively, were his last words on the subject.

In terms of both performance and sound, my own previous favorites for the Franck Symphony were Charles Dutoit's digital recording on Decca and Sir Thomas Beecham's on EMI. I'll stick with commenting on Dutoit for comparison purposes, his performance and sound being very good (although not quite as good as Beecham's). Alongside the remastered Monteux, however, Dutoit seems more matter of fact, more suavely elegant, to be sure, but ultimately more mundane than Monteux. Monteux, on the other hand, is more reposed and more insightful. Although his timings are not much different from Dutoit's, Monteux's pacing is more meaningful for his greater lingering on pauses, his greater affection for phrasing.

The music under Monteux is just as dramatic in the opening and closing movements as Dutoit's, swinging from moody to energetic, but it is especially more ravishing in the central Allegretto, with its prominent English horn solo, and in the playfulness of the slender scherzo-like theme that follows. The sound of the Dutoit disc is admittedly more detailed, but it is really no more lifelike. Where the newer Decca recording comes into its own is by its filling in the center of the orchestral sound better, Monteux's RCA recording being a bit more prominent in the left and right channels.

The Stravinsky is another matter, and none of my references here--Rattle, Muti, Ansermet, Davis, and Haitink--moved me as much as Monteux did. Petrouchka has always struck me as a rather creepy little ballet, anyway, and Monteux brings out all the color of the slightly sinister characters and events.

The sound is even better here with the Boston Symphony than in the Franck with the CSO. My only previous experience with the recording was on an old LP that disappointed me greatly for its dullness and noise. But the recording is now shiny and well remastered, the highs sparkling, the midrange natural, the bass robust, the stereo spread considerable. Interestingly, Monteux introduced Petrouchka to American audiences in 1920 while also conducting the Boston Symphony Orchestra.

To have both performances on a single, mid-priced CD is a godsend (and more recently remastered on an SACD). Obviously, I highly recommend it.