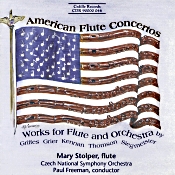 Cedille Records just keep rolling merrily along, producing some of the best-sounding CDs in the marketplace. Even when the recording originates in Prague, as this one does, it sounds as natural and lifelike as the company's Chicago-based productions.

The works for flute and orchestra presented here are all by American composers, meaning they are relatively modern. The earliest was written in 1918, Charles Griffes's "Poem for Flute and Orchestra."  It is done in a single, ten-minute movement, largely melancholy, with a simple lyrical twist about halfway through. Coming next chronologically is Kent Kennan's "Night Soliloquy for Flute, Strings and Piano," 1936. He aptly titled it, as it conjures up images of a quiet, almost eerie night that builds up momentum to a dramatic solo, eventually fading into nothingness.

The most famous name on the program is that of Virgil Thomson, represented here by his "Concerto for Flute, Strings, Harp and Percussion" from 1954. It is unusual in that its first movement is entirely a flute solo. It is mostly calm and settled, building only slightly as it moves forward; it is followed by a sullen middle movement, and then by the entrance of harp and percussion in the finale.

From 1960 comes Elie Siegmeister's "Concerto for Flute and Orchestra." It begins as a nostalgic piece and then works its way toward jazz and more modern rhythms by the end. Finally, the newest work on the disc is the one that opens the album, Lita Grier's "Renascence," 1996, which the composer calls her "rebirth" because it was her first new composition in over thirty years. Of the three movements, the first and third are quick, lively, spirited, and just a little quirky. They display a variety of temperaments, none developed at length. The slow middle movement, however, is beautifully haunting and Debussy-like in its pastel shadings.

Handling the flute solos is Mary Stolper, currently the Principal Flute of the Grant Park Symphony, Chicago Opera Theater, and the music ensemble Fulcrum Point. Throughout these works, her playing remains graceful, fluid, and animated by turns. The late conductor Paul Freeman's orchestral accompaniment is almost invisible, and the Czech National Symphony Orchestra provides a cozy support. Although the album is a little on the somber side, it takes a fascinating and well-deserved glimpse at some of America's less-known and perhaps less-appreciated music.

The sound for the disc is clear, reasonably transparent, and well balanced, never unduly highlighting any single instrument, except, of course, the flute, which the engineers have placed realistically within the ensemble setting.