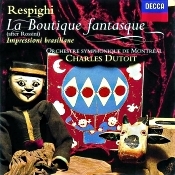 Italian composer Ottorino Respighi (1879–1936), celebrated mostly for his collections of tone poems like The Pines of Rome, The Fountains of Rome, and The Festivals of Rome, he also created the music for the delightful ballet composite La Boutique fantasque (or "The Magic Toy Shop"), based on lesser-known tunes by Gioacchino Rossini and premiered in 1919. The music makes a splendid impression under conductor Charles Dutoit and the Montreal Symphony.

La Boutique fantasque has a built-in charm. How can one not like a ballet that brings toys to life after the toy shop closes? My comparison in the work was the equally well played recording by Richard Bonynge, an early digital release (1982) also from Decca (which I listened to on a London CD). Dutoit brings a gentler, more delicate quality to the score than Bonynge, which may or may not please all listeners while certainly making the work easy to listen to.

But it's in its sonic properties that the new disc scores over its older rival. Dutoit's orchestra sounds smoother, buttery smooth, in fact, more dynamic, and, most important, better imaged. There is a depth and breadth to the orchestral arena that makes the Bonynge effort sound positively one-dimensional. Dutoit's acoustic is natural and alive, preserving detail and clarity within a subtly reverberant ambiance.

Dutoit's coupling, Respighi's Impressioni brasiliane, seems surprisingly refined for a composer so often thought of for his vigorous color. The piece is almost sedate in its understatement but, frankly, doesn't capture a whole lot of Brazil's traditional spirit until the final movement.

Overall, though, Dutoit's La Boutique fantasque is undoubtedly among the best recordings available of it, surely one of the best sounding, and its companion piece makes it an even better value.