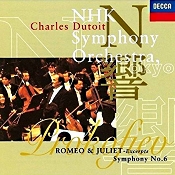 First, a few notes of clarification. After Universal's acquisition of PolyGram, the English and American Decca labels were no longer in conflict. Thus, Decca no longer had to market its product in America under the alternative London title to avoid conflict with the unrelated American Decca label. As of the late Nineties, London Records was no more. Hello, Decca.

This no doubt sent shock waves through the audiophile community, which for the previous half century had sworn that original English Deccas sounded superior to the lowly London products sent to America. Just an observation from decades ago.

Next, Charles Dutoit was for a long time the Music Director of the Montreal Symphony Orchestra, then became the Principal Conductor of Japan's NHK Symphony Orchestra and England's Royal Philharmonic, facts that only struck me a few minutes into the Romeo and Juliet excerpts reviewed here. Something was not right, I said to myself. Then I looked at the jewel box. Part of my concern was related to the orchestra itself not sounding right, not as well upholstered, velvety, or smooth as the Montreal group, and part to the different venue, Tokyo in the Romeo and Juliet, Vienna in the Sixth Symphony. From this first issue with the NHK Symphony in 1999, I can't say I liked the new orchestra or the new sound very much.

The ballet highlights sound, frankly, nondescript. They aren't completely bland, but they have relatively little color or character to them. After such noteworthy interpretations as those from Previn, Maazel, and Leinsdorf, as well as from Dutoit himself in a previous Decca recording with Montreal, these NHK readings seem almost lifeless.

The Symphony No. 6, on the other hand, appears more creatively performed, the bizarre workings of this Romeo and Juliet-cum-Shostakovich piece more vividly contrasted than the excerpts are. The symphony's opening Allegro brings mainly gloom, apparently symbolizing the Russian suffering in the Second World War. The middle movement, a broad Largo, begins in the same mood and then unexpectedly changes to one of mellowness, grace, and then perhaps sweet regret. The final section of this three-movement symphony Prokofiev marked Vivace, and it is, indeed, quick and lively. Its neoclassical exuberance may reflect an expression of relief at War's end, but this portion nevertheless concludes ambiguously. Dutoit succeeds in exacting significance from each passage.

The Decca sonics for the two pieces do not impress one as vividly as did the sound of the old Montreal recordings I was used to. The Romeo and Juliet, which Decca recorded in Japan, appears dark in the midrange, bright and edgy in the highs, and one-dimensional overall. The Symphony, recorded in Austria, seems a tad better. It sounds more flowing  and has better depth. Neither, though, can match the flattering ambiance Dutoit had always received in his Canadian location.

As a sonic reality check, I suggest a comparison of the sound of Dutoit's digital release to that of the simultaneously reissued, forty-year-older Arthur Fiedler recording, "Pops Stoppers," on RCA Living Stereo. Different material but different sonics, too. And no contest. The older disc wins hands down.