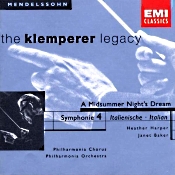 I love reissues. They're so easy. They take the suspense out of buying music; you know when you're buying something you like. Klemperer's Mendelssohn, for instance, recorded in 1960, is something to like.

It may seem ironic that a man with Klemperer's reputation for dealing with massive constructions in massive sound should be equally at home in music so delicate and airy as Mendelssohn's, but it's true. Klemperer could be remarkably sensitive in the music of Mendelssohn, Schubert, Schumann, Haydn, and Mozart as well as the more monumental productions of Beethoven, Bruckner, Wagner, and Mahler. The fact is, you will not find a more relaxed Mendelssohn Fourth Symphony on record than Klemperer's. The first movement is sunny and light rather than viscerally exciting. It reflects the sunny, southern Italian shores rather than the high mountains of the north. If you want excitement, stick with Abbado (HDTT, Decca, or the later DG). Klemperer's handling of the second movement flows gently along, smoothly integrating with a graceful third movement minuet. Then his fourth movement bursts forth into as joyous a finale as you will find anywhere.

The coupling is doubly apt because never before have I heard a stronger connection between the Fourth Symphony and the Incidental Music from A Midsummer Night's Dream. Under Klemperer's direction, the tempos, the phrasing, the overall mood, are all conveyed with the same remarkable cordiality. It is as if one were a natural extension of the other, the symphony made to sound more like the fairy music of Shakespeare's creation than under any other conductor. Well, Klemperer had already had a lifetime of playing the Midsummer Night's Dream music, which he considered one of his favorite works when he recorded it here, so I suppose practice makes perfect. Only Previn's rendering, also on EMI (now Warner), is as good, with its more complete score and even smoother sound.

The Klemperer sound, though, is vintage EMI and vintage Walter Legge, the producer who was such a stickler about everything. Sonically, there is little difference between this remastering of the Fourth Symphony on this "Klemperer Legacy" reissue and EMI's earlier mastering of several years before. It remains a tad thin and bright but exceptionally clean and clear, with excellent stage depth. The percussion, timpani, cymbals, etc., which belong at the rear at the orchestra, really are at the rear of the orchestra.

Previously, in order to get both of these Klemperer recordings, you had to pay for two separate discs. With this particular reissue, you get two great performances coupled together on a single, mid-priced release that must be counted an incomparable bargain. How I love reissues.