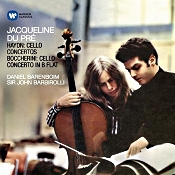 Perhaps owing something to the popularity of the 1998 movie about the English cellist Jacqueline du Pre, Hilary and Jackie, her old record company, EMI, re-released more of her work in the late 90's, giving her music a deserved new lease on life. After Ms. Du Pre's tragic death in 1987, her legacy could have been lost to all but the most avid music lovers. Thanks to EMI, however, and now Warner Classics, her Haydn and Boccherini are remastered and sound better than ever.

Her style in these pieces is, as always, sweetly expressive, warmly lyrical, broadly passionate, and I daresay by today's standards a little old-fashioned. Certainly, that's the way the music comes off compared to the less-adorned period-instrument renditions so much in vogue these days. She is best in both of the Haydn slow movements, where her natural affection for the music and for her instrument shine through effectively. The finale of the first concerto is a delight, too, full of youthful intensity and exuberance.

The Boccherini is another story, through no fault of Ms. du Pre. In its familiar late-Romantic Grutzmacher arrangement, any resemblance between this piece and Boccherini seems purely accidental. It is so lushly orchestrated it could hardly be called Boccherini, and Ms. du Pre plays it in appropriate nineteenth-century fashion--long winded and luxuriant. There is nothing wrong with this approach, of course; it's just, again, a tad old-fashioned, and I'm happy for it.

The remastered sound of the first Haydn concerto and the Boccherini, recorded with Ms. du Pre's husband Daniel Barenboim and the English Chamber Orchestra in 1967, is ultra smooth and adequately revealing. It is not so clear, however, as either of the newer releases I reviewed at about the same time from Ha-Nah Chang and Giuseppe Sinopoli (EMI) or Steven Isserlis and Roger Norrington (RCA), although it is closer to the Chang in performance and closer to the Isserlis in audio quality.

The sound in the second Haydn concerto, recorded a few months later with Sir John Barbirolli and the London Symphony Orchestra, is very slightly better defined. None of this matters much as the ear adapts quickly to the beauty of the playing rather than obsessing with any sonic imperfections. Besides, unless you were to put on the other discs as I did for direct comparison in two identical-sounding CD players, you would find little fault in the sound of the older Du Pre recordings. As usual, Du Pre gets my wholehearted endorsement.