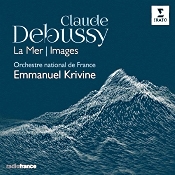 The last time I heard a recording from French conductor Emmanuel Krivine, it was Rimsky-Korsakov's Scheherazade with the Philharmonia Orchestra on Denon, a performance I found beautifully lyrical and engaging. But that was over a quarter century ago. Although Maestro Krivine has continued with a distinguished career in the concert hall and recording studio, he hasn't quite been front and center in the general public's eye. Nevertheless, he currently holds the position of Music Director of the Orchestre National de France, with which he recorded the current Erato disc of Debussy's La Mer and Images. It was good to reacquaint myself with him.

French impressionist composer Claude Debussy (1862-1918) wrote La Mer between 1903 and 1905, and the work has since become one of his most well-known pieces. Certainly, it is one of his greatest and most descriptive pieces. Debussy named it La mer, trois esquisses symphoniques pour orchestre (or "The sea, three symphonic sketches for orchestra"), but usually people just call it La Mer. He made it clear that even though the movements have descriptive titles, he didn't consider the work program music. As an impressionist, Debussy was conjuring up just that--musical impressions, in this case of the sea.

Debussy said he wanted the first movement, "From dawn till noon on the sea," to be a little less showy than the other movements and added that the conductor should take it slowly and animate it little by little. It begins with a warmly atmospheric introduction and then opens up about halfway through to a rapturous melody. In this first movement, Krivine takes the composer at his word, and it is quite gentle until opening up to the big melodies. In this regard, it reminded me of Jean Martinon's rendering of the work, sweet and lyrical.

The composer intended the second movement, "Play of the waves," to sound light and carefree, the dancing waters luminescent and magical. He indicated it should be an allegro (a brisk, lively tempo), animated with a versatile rhythm. In reality, the second movement acts as a kind of slowish scherzo, although, to be fair, it isn't actually slow or fast. As its subtitle indicates, it's more playful than anything else, and again Krivine does well by it. His approach is perhaps not so frothy or enchanting as Martinon's, Previn's, or Reiner's readings, but it is charming nonetheless.

Then comes probably the most well-known segment of the work, the third-movement finale, "Dialogue between wind and waves," in which Debussy provided his biggest splashes of color and which he noted should sound animated and tumultuous. It is only here that Krivine is possibly a little too lightweight, choosing to caress the waves rather than picturing them as particularly turbulent. Krivine's is a legitimately poetic realization of the score, which will please some listeners and maybe not others. (If you're looking for ultimate power, try Stokowski's reading with the LSO on Decca or, especially, HDTT.)

Accompanying La Mer is Debussy's Images pour orchestre, which he wrote between 1905-1912, originally designing it as a two-piano sequel to his Images for Solo Piano. As he did in La Mer, Debussy divided the work into three sections, three movements, each inspired by a country or a song.

In the first section, "Gigues," Debussy used his recollections of England as his inspiration for the music. Krivine does a fine job conveying both the light and serious moods of the music, with an effective varying of contrasts, tempos, dynamics, and the like.

In the second, longest, and probably most-familiar section, "Iberia," Debussy used his memories of Spain as inspiration. He further divided this section into three more parts: "Par les rues et par les chemins" ("Through the streets and the paths"); "Les parfums de la nuit" ("The fragrance of the night"); and "Le matin d'un jour de fête" ("The morning of a festival day"). Here, Krivine is in his element, with pleasantly flowing rhythms. Although his account of things is perhaps not as lively as Argenta's performance or as well recorded as Haitink's, it does capture much of the music's color and joy.

In the closing section, "Rondes de printemps ("Round dances of spring"), Debussy relied for inspiration on a pair of songs. Krivine does a splendid job with this section, finishing up the piece by tying it to, if anything, La Mer, with its frolicsome play of tunes, phrases, and tonalities. I'm sure Krivine didn't emphasize these similarities by accident, and it provides an appropriate way to end the program.

Finally, as a bonus track, we get an excerpt from Debussy's original 1905 version of the third movement of La Mer, which contains a brief fanfare in bars 237-144 that the composer later decided was inappropriate and cut.

Producer Daniel Zalay and engineers Maiwenn Legehan and Philippe Thibaut recorded the music at the Auditorium Radio France in March 2017. The sound they obtained is clear and natural, with a fairly good orchestral perspective, depth and width, slightly warm yet fairly transparent. There is nothing spectacular about it; it's not as up-close as Stokowski's recording or quite as detailed as Previn's. It is realistic and engaging, with a decent frequency response (again, not heavy on the bass or treble) and a moderate dynamic range and impact.