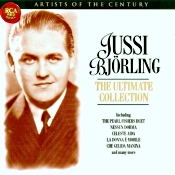 When RCA released one of their sets of Caruso recordings, they labeled it "The Greatest Tenor in the World." Certainly, the fans of Swedish tenor Jussi Bjorling (1911-1960) might have a say about that.

This two-disc set of Bjorling recordings is in RCA's "Artists of the Century" line, which also includes the aforementioned Caruso, Leontyne Price, Mario Lanza, and others. The Bjorling set contains twenty selections on the first disc and twelve more on the second for a generous total of 156 minutes, plus an informative set of booklet notes.

Bjorling was in his forties and at the height of his career when RCA made these recordings between 1950-1959, just before his untimely passing in 1960. They demonstrate a voice that is at once strong and robust yet lyrical and soaring. He was able to float a high note sweeter than most anyone on stage and to maintain an amazingly clear enunciation in the process.

Naturally, the digitally remastered audio quality varies from one piece to the next, some done in monaural, some in stereo; but none of it sounds overly compromised by noise reduction. A few of the songs are brighter, rougher, and edgier than others, it's true, but that we should expect. Compared to an earlier collection of Bjorling recordings from the thirties and forties on EMI, the RCA sound is cleaner, clearer, and more open. And, amazingly, the later voice had lost hardly an iota of its youthful vigor.

This must be counted among the best compilations of the great tenor's work on disc.