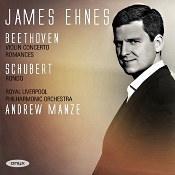 The invention of the violin predates the piano by several hundred years and violins comprise the biggest part of an orchestra; yet from the Classical Period onward, the piano has dominated the concerto field. Maybe that's as it should be, given that so many composers of classical music were also pianists. Nevertheless, the violin hung in there, with the Beethoven Violin Concerto in D major, Op. 61 being one of the most prominent. It's good to welcome any new recording of it.

Canadian violinist James Ehnes tackles the project this time out. As he is a musician who has always impressed me as levelheaded, elegant, and graceful, he seems just the right fellow for the job. Beethoven wrote his violin concerto in 1806 and premiered it to a surprisingly indifferent response. It wasn't until well after the composer's death that it finally took off and became a staple of the violin repertoire.

Beethoven structured the concerto traditionally, with an expansive opening movement, a serene slow movement, and a sprightly conclusion (with no break between the two final movements). A number of prominent violinists have written their own cadenzas for the work, and Mr. Ehnes uses the popular ones by Fritz Kreisler.

After the fairly lengthy orchestral introduction, which Maestro Andrew Manze handles with a casual command, Ehnes enters exhibiting a sweet, unforced tone that he will maintain throughout the piece. Although Ehnes hasn't quite the stylistic dominance of a Heifetz or a Perlman, he is quite good, especially in his emphasis on contrasts. They are not pronounced to any extreme, but both he and Manze place just enough stress on softer and louder notes, quieter and more tumultuous passages, and shorter and longer pauses to make this interpretation stand out. In other words, even though the tempos are just a tad on the quick side, you'll find enough variation in the performance to keep it fresh without distorting the composer's intentions.

Needless to say, Ehnes's playing is exceptionally deft. His nimbleness in even the most difficult sections is a joy, clean and clear and virtuosic. This is an imaginative, highly rhythmical, yet charmingly lyrical reading that sweeps one along effortlessly. The second-movement Larghetto is sublime, and Ehnes handles it smoothly and unfussily. His playing is delicate and lilting, his phrasing light and airy; it's as lovely a rendering as any you'll find. Then Ehnes and the orchestra make the transition to the delightfully energetic finale with an easy grace and sustain the high spirits to the end.

For couplings, Ehnes provides Beethoven's Romances for Violin and Orchestra, Nos. 1 and 2 and Franz Schubert's little Rondo in A major. Interestingly, Beethoven wrote the second of the Romances (1798) a few years before he wrote the first one (1802), but because of their order of publication, the latter one gets the earlier number. And it's not even clear why Beethoven wrote them; that is, for what occasion. Whatever, they are highly popular and strongly Romantic. The Romance No. 1 is the slightly more serious of the two, which may have something to do with Beethoven's own development as a composer. In any case, all of the good traits we heard from Ehnes in the concerto we hear again: grace, elegance, refinement, and imagination.

Producer Simon Kiln and engineer Arne Akselberg recorded the music at Liverpool Philharmonic Hall in September and October 2016. The sound is very natural, the orchestral sonics wide and deep, with no undue spotlighting and a modest room resonance. The solo violin is well integrated with the orchestra, in front but not in our face. The violin, too, sounds lifelike: clear and vibrant but neither hard nor bright. Frequency response is reasonably wide as are the dynamics throughout, so it's realistic recorded sound.

Overall, taking into account performance and sound, this recording must take a place among the better choices one can make in the work. Even though Ehnes and company are in a crowded field, they have made a place for themselves.