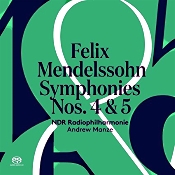 The last time I heard English conductor and violinist Andrew Manze doing Mendelssohn, it was in the First and Third Symphonies, where his propensity for zippy, early music practice produced a pair of exciting but, for me, not entirely persuasive performances. Continuing his Mendelssohn series, here he and the German radio orchestra NDR Radiophilharmonie tackle the popular Fourth Symphony and the more solemn Fifth. Although the disc would not displace my own old favorites, for Mendelssohn fans it might still provide a worthwhile listen.

First up on the program is the Symphony No. 4 in A, Op. 90 "Italian," which Mendelssohn wrote after a trip to Italy and premiered 1833. The first movement Allegro is among the most recognizable of all the music Mendelssohn wrote for his symphonies. Then, music scholars think that the many religious processions Mendelssohn saw in Rome may have inspired the second-movement Andante. There follows a delicate minuet, and the work concludes with a whirlwind of music reminiscent of the composer's Midsummer Night's Dream.

Despite my initial reservations that Manze's historical-performance inclinations might lead him to tempos at a more robust gait than I like, he actually takes things at a reasonably pleasant, if sometimes exhilarating pace. With well-judged dynamic inflections and an orchestra that seems to follow his every direction, the result in the first movement is as sunny as any, if a tad dark and billowy due to the recording's pronounced ambient bloom.

Manze emphasizes the staccato motif of the second movement at perhaps a headier stride than other conductors often take, yet it seems to fit the strapping dimensions for the piece the conductor envisions. The rhapsodic elements of the third movement come to the fore under Manze, too, and he makes it a welcome contrast to the preceding parade-like passages. Then, the conductor provides a fittingly high-spirited finale that seems only mildly rushed.

Compared to the ebullient "Italian" symphony, the Fifth can appear positively grave. Interestingly, the Fifth, finished in 1830, was actually only the second symphony Mendelssohn wrote. However, the composer couldn't complete it in time for a commission and never liked it much, anyway, refusing in his lifetime to allow its publication, which didn't occur until some twenty-nine years after his death. (For those interested, the order of composition for Mendelssohn's symphonies is 1, 5, 4, 2, and 3.)

Mendelssohn's sister Fanny dubbed No. 5 in D Minor, Op. 107 the "Reformation Symphony" because its subject matter celebrated the Protestant Reformation. The composer wrote it, as I said, on commission--for some festivities in Berlin, but ill health prevented him from completing it and he finally premiered it in 1832. After a somber opening movement, the symphony moves to a much-lighter Allegro vivace and a lyrical Andante, all culminating in a finale based on Martin Luther's chorale "Ein feste Burg ist unser Gott" ("A mighty fortress is our God").

Here, Manze's big-scale yet intimate-feeling approach works quite well. His "Reformation" doesn't have the ponderous dimensions that some conductors seem to impose on it. Instead, it comes out more cohesive, more of a whole, tying the opening movements more closely to the last, giving the little Allegro its sprightly due and the Andante a gentle lilt. It all builds, of course, to that final chorale, which Manze handles splendidly, building and magnifying with a dignified grandeur.

So, could I say that Manze's performance of the "Italian" symphony strikes my fancy more than several of my old favorites? Not exactly. My two favorites (among others) in the "Italian" could not be more different from one another nor more different from Manze's interpretation. They are the recordings by Claudio Abbado in his earlier Decca rendering and Otto Klemperer in his EMI reading. Both continue to strike me as having more sheer joy, zest, and charm than anybody else's. In the "Reformation," though, Manze is no doubt as good as anybody, and his realization should greatly please fans of the work.

Producers Renaud Loranger and Matthias Llkenhans and engineer Martin Lohmann recorded the symphonies in the Grober Sendesaal desNDR Landesfunkhaus in January 2016 and February 2017. They made the hybrid recording for SACD multichannel and two-channel stereo playback via an SACD player as well as two-channel stereo via a regular CD player. I listened in two-channel SACD.

The sound is much the same as Pentatone delivered for Manze's previous Mendelssohn disc, so I'll repeat what I said of it: There is a good deal of ambient reflection around the orchestra, almost too much. The reflections may sound realistic in multichannel, but in two-channel stereo they can be overmuch and somewhat obscure inner detailing. Still, it's not too distracting, and the overall sonic image is impressively dynamic. To be fair, there's enough of a lifelike quality about the sound to satisfy most listeners.

As always with these things, the Pentatone folks do up the disc with a standard SACD case, further enclosed in a light-cardboard slipcover. My bewilderment continues, though, over what purpose a slipcover actually serves, but it is a handsome packaging feature, redundant or not. I wish I could say the same for the minimalist design of the album/booklet cover.