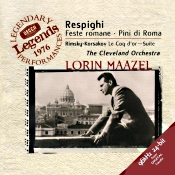 Let's ignore for the time being the Roman Festivals, which are mostly noisy and bombastic, and concentrate on the late Maestro Lorin Maazel's interpretation of the Pines of Rome. It is among the best available.

Recorded in 1976, Maazel's performance is colorful, sometimes splashy, sometimes subtle, always vivid, and picturesque, everything you'd want from these miniature tone paintings. Maazel's rendering of them doesn't, perhaps, convey quite the individual expression of Fritz Reiner's classic set (RCA "Living Stereo" or the JVC XRCD remastering), but they come close. More important, they culminate in one of the best, most exciting versions of "The Pines of the Appian Way" you'll find. We hear the Roman legions first, of course, from a distance, their march coming closer and closer, sounding all the more ominous as they approach. When they reach our vantage point, the effect is staggering, especially if you have a good subwoofer.

Paired with the two Respighi works we find an agreeably colorful reading of Rimsky-Korsakov's suite from Le Coq d'r, (The Golden Cockerel). It may not be the most exciting rendition around, but it does provide an all-around pleasant listening experience. The Cleveland Orchestra play terrifically well for Maazel, with plenty of professional enthusiasm evident.

Decca's 1976 sound for the Cleveland Orchestra didn't always impress me as much as Columbia's (Sony's) did in the old Szell days, but this transitional recording, remastered in Decca's "Legends" series in 2000 radiates much the same energy and presence. There is a decent orchestral perspective, decent front-to-back dimension, some small smothering of the mid frequencies, and tremendous bass.

Yes, tremendous bass, important in numbers like the aforementioned "Appian Way," as well as in the "Catacombs" and the "Epiphany" from Feste romane. Remastered in 96kHz, 24-bit digital sound in Decca's "Legends" series, the audio is perhaps a hair smoother and more transparent than it was in their older Ovation line, to which I compared it. And I much prefer the new coupling to that of the previous coupling, too.