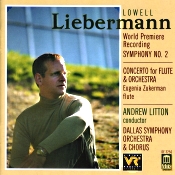 It took long enough, but at least somebody is listening. Lowell Liebermann (b. 1961) takes twentieth-century music out of the realm of purely atonal dissonance and attempts to move us with beautiful, often relatively old-fashioned musical sounds. He presently serves on the composition faculty at Mannes College The New School for Music, and he is the director of the Mannes American Composers Ensemble.

In a booklet note Peter G. Davis asks, "Did musical composition take a wrong turn at some point early in the twentieth century?" Clearly, he wants us to answer yes, or how explain, he asks, the general public's disinterest in modern classical music. Of course classical music connoisseurs will always take an interest in new material. They will always embrace the unique and innovative; but your next-door neighbor? Not so much. It hasn't helped, too, that critics throughout the twentieth century have been telling the general public they are just too unsophisticated, too ignorant, to understand modern music, but Davis suggests the ruse hasn't worked. Music for the masses, music with melody and rhythm and harmony, is still preeminent in the public eye, he says, and people like Lowell Liebermann are in the forefront of the movement to highlight it.

Whatever, Liebermann's Symphony No. 2, composed in 1999, here finding its premiere recording.  However, one listen and you might swear he had written it at the end of the nineteenth century as at the end of the twentieth. The music sounds reminiscent in many ways of Mahler, filled with big, sweeping tunes, marches, soaring harmonic lines, and even a choral component. It's based on passages from the American poet Walt Whitman and celebrates, as Whitman did, a love of life and nature. It may not make anyone forget Beethoven, Brahms, or Mahler, but it's a step in the right direction for listeners who would like to hear more accessible music from our classical composers. It also helps that Andrew Litton and the Dallas Symphony Orchestra and Chorus perform the work with a delightful dash.

What's more, I liked the Second Symphony's companion piece even better. Liebermann dedicated the Concerto for Flute and Orchestra (1992) to James Galway, and it shows an even greater Romantic flair than the newer work. It has a lovely lyricism to its opening two passages and a playful lightness about its Presto finale. Here, Eugenia Zukerman, flute, adds a special, sympathetic touch to the proceedings.

Delos engineer John Eargle provided the orchestra and chorus a big, somewhat thick, and very dynamic sound. As was the case in the 1990's and early 2000's, the record company recorded it for eventual playback in discrete five-channel surround, but they remastered the disc I reviewed for two-channel stereo, playable on any standard CD player. Of course, one may also play it back via Dolby Pro Logic or some other such synthetic decoding, but in ordinary two-channel it appears just fine, if a bit congested at times and somewhat flat dimensionally. Still, there is a realistic bloom around the instruments, and definition is reasonably sharp.

Getting back to Mr. Davis's argument, though, I suppose that just as popular music took a sudden swing into heavy metal and rap in the latter part of the preceding century, classical music did the same from the early twentieth century on. (And, please, I'd rather not get angry letters from rock and rap fans any more than from diehard modern classical aficionados; we'll all enjoy our own music together in our own way.) Anyhow, it now appears the pendulum might be swinging in the other direction. What goes around comes around, I suppose. Liebermann's music comes as a welcome breath of fresh (if somewhat old-fashioned) air, and we should probably encourage anything new, even if it's old.

Email ThisBlogThis!Share to TwitterShare to FacebookShare to Pinterest
Labels: Liebermann