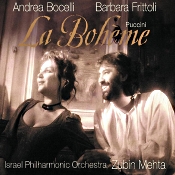 Passion. It's what I think of first when I think of Giacomo Puccini's La Boheme. Without passion, the opera is just beautiful music. Not that there's anything wrong with beautiful music, mind you, and with this set you'll get that aplenty. But something magical happens when the performers invest the music with an ardent Italianate fervor. This is evident in the great La Boheme recordings of the past like those from De los Angeles, Bjorling, and Beecham (EMI); Freni, Pavarotti, and Karajan (Decca); or Tebaldi, Bergonzi, and Serafin (Decca). By contrast, especially to the first two, which I had on hand for comparison, the team of Barbara Frittoli, Andrea Bocelli, and Zubin Mehta in the 2000 Decca set under review doesn't quite scale the same heights of excitement.

Where the older stars were sweet and lyrical where needed and expressive and thrilling likewise, the newcomers seem more interested merely in reproducing lovely tunes. In the big numbers like "Che gelida manina" and "Si, Mi chiamano Mimi" and "O soave fanciulla," Frittoli and Bocelli fail to set the soul on fire or to make the hair on the back of the neck stand up the way the others do. Frittoli and Bocelli failed to convince me of their love, their ardor--in essence, their passion. Nor do they evoke the kind of sympathy they should for Mimi and Rodolfo in the final death scene, in "Oh Dio! Mimi!" and "Che ha detto il medico?"

The singers' voices are pure, their enunciation is letter perfect, and undoubtedly their hearts are in the right place. They sing as sweetly as one could hope for and make this La Boheme a warm event; nothing can diminish Puccini's capacity for refined sentimentality and beauty of tone. Nevertheless, do they have that extra dimension that sets them apart and makes us want to weep along with them? Not really, except, I suppose, to Bocelli fans who love everything the man sings, no matter what.

Where the new Decca recording does shine, however, is in its aural clarity. It is in most ways the best recorded of the ones I've mentioned, and it sounds decidedly better than the Tebaldi-Bergonzi set, which is much older than any of them. The newer Decca displays voices that sound practically in the room with the listener. Still, the older Freni-Pavarotti Decca has a sonic quality all its own that's hard to beat, too; namely, the reverberant ambiance of a live performance that may bring the listener closer to the actual event.

It's hard to say just who the audience might be for any Puccini recording. Certainly, opera collectors and Puccini fans will want everything that comes along. Andrea Bocelli is a hot star at any time, and many of his fans will want to hear him singing anything. Those listeners interested primarily in sonic value will no doubt find the Bocelli venture to their liking (although, to be honest, it sounded a little lacking in stage depth to me). For first-time buyers I'd still recommend Freni-Pavarotti as the best all-around bet, grand opera at its most sweeping, feverish best. Moreover, if you haven't heard the sets from Vaduva, Alagna, and Pappano (EMI) or Gheorghiu, Alagna, and Chailly (Decca) or Moffo, Tucker, and Leinsdorf (RCA), you might like them, as well.

Email ThisBlogThis!Share to TwitterShare to FacebookShare to Pinterest
Labels: Puccini