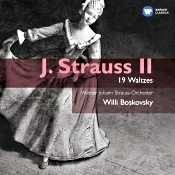 According to what I've read about Austrian violinist and conductor Willi Boskovsky (1909-1991), his orchestras didn't particularly like him as a music director. Nevertheless, from playing violin with the Vienna Philharmonic he went on to leading the orchestra in music largely of Johann Strauss in the Fifties, and audiences adored him, which is all that mattered. His Decca recordings from those early years are still among the yardsticks by which people judge Strauss music today. By the early Seventies, however, he was recording for EMI with the Johann Strauss Orchestra of Vienna, and he re-recorded most of the major Strauss repertoire for them. Then, when digital entered the scene, he re-recorded them yet again. You might say he became a specialist in the field. What we have in this 2007 rerelease from Warner Classics of the original EMI set is a collection of nineteen of Strauss's most famous waltzes from the early digital age of the Eighties.

Interestingly, many of these digital recordings are more sprightly and open than his analogue recordings with the same orchestra had been a decade before. The digital sound is less warm and less full, true, but the sound is a bit more detailed and carries with it little obvious digital brightness or edginess. More important, the performances themselves are a fraction quicker and more spontaneous, a delight in every way, almost matching his Decca renditions of much earlier. Although, to be fair, I still think the Vienna recordings are richer and more elegant than any of Boskovsky's later productions.

Among the nineteen waltzes on these two Warner discs are practically everything you've ever heard of: "The Blue Danube," of course, "Roses from the South," "Vienna Blood," "Voices of Spring," "Artist's Life," "Tales from the Vienna Woods," "Emperor Waltz," "Morning Papers," "Accelerations," "Lagoon Waltz," "Du und Du," "Wine, Women and Song," "Danube Maiden," and a few you might not have heard of like "Literary Essay," "Leading Article," "Pamphlets," and "Flight of Fancy."

It's a terrific collection of waltzes, really, at an incredibly reasonable price. One minor concern, though. The booklet lists "Tales from the Vienna Woods" as being recorded with Rudi Knabl on zither, and the booklet article notes the piece "with its important part for the zither." But not here; there's not a zither in sight or sound. The original EMI booklet notes correctly list the work's recording date as 1982, but in that recording Boskovsky chose to bypass the zither and use a violin. At the time of putting together this collection, EMI must have been thinking of Boskovsky's 1985 recording, which I had on hand, where he reinstated the instrument with Mr. Knabl playing it. I can only guess that the mix-up was an oversight on EMI's part, a confusion not hard to understand given that Boskovsky recorded "Tales" at least four times in stereo: 1963, 1972, 1982, and 1985.

I prefer the zither, by the way, but other than that there is no reason not to enjoy the set fully.