Gubaidulina: The Canticle of the Sun (CD review) 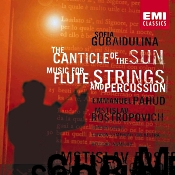 I want to commend this EMI recording of prizewinning Russian composer Sofia Gubaidulina's 1997 work The Canticle of the Sun for one thing in particular: it gave me one of the best snoozes I've had in many afternoons. About fifteen minutes into the forty-minute piece I fell asleep on the couch, and twenty minutes later when I awakened I swear I was taking up right where I'd left off. I gave it a second chance, of course, but it wasn't much better for me. Let us say, then, that it's a strange but fascinating work that probably appeals to a very personal musical taste, and that taste may very well be more yours than mine.

Ms. Gubaidulina, who admits to being a "profoundly spiritual person," based The Canticle of the Sun on a text by Saint Francis of Assisi, and the composer dedicated the work to cellist Mstislav Rostropovich, who here leads the London Symphony Orchestra in another of their meticulous performances. I believe this 2001 disc was the work's premiere recording.

I have mentioned before that I have little understanding of or appreciation for much modern music. Certainly, my limitations as a critic of such music are no more in evidence than with this piece: I found Ms. Gubaidulina's work repetitive and not a little tedious; yet at the same time I did not find her minimalist view at all disconcerting or inharmonious as so much modern music can be. Indeed, some of Ms. Gubaidulina's piece is quite beautiful. Her seemingly random selection of slowly played cello notes, percussion dings, and eerie vocal phrasings actually demonstrate a certain brilliance, and there is no questioning Ms. Gubaidulina's sincerity or the LSO's intensity.

Ms. Gubaidulina writes in a booklet insert that she was trying to "reveal the sunny personality of a brilliant musician, Mstislav Rostropovich." Well, there you could have fooled me; the music seems anything but sunny. She also writes, "Under no circumstances should the expression of this canticle be intensified by music." I'd say she succeeded there beyond expectation. "This is the glorification of the Creator and His Creation by a very humble, simple Christian friar." This would account for the seeming simplicity of the music, I suppose, but I hope that the good Saint Francis was not so unusual as I found some of Ms. Gubaidulina's material.

On the other hand, I quite liked the Music for Flute, Strings, and Percussion, which Gubaidulina wrote in 1994. Although it tends to go on at times for too long, occasionally losing its rhythm, it exhibits an honest and uplifting soul in its more-accessible sonorities, helped no doubt by Mr. Pahud's playing.

Anyway, as I say, lovers of contemporary classical music will undoubtedly vilify me for not understanding much of Ms. Gubaidulina's Canticle; I stand open to the criticism and admit my ignorance. The work seldom entertained, uplifted, or enlightened me in the way I'm sure the composer intended. Indeed, until I read Ms. Gubaidulina's notes afterwards, I had no idea what she was up to. And then, after I read her notes, I still didn't know what it was about. Nevertheless, I cannot suggest that other listeners should not try it for themselves, especially when the accompanying work is so haunting.

In its favor, too, I can say assuredly that EMI recorded the music exceptionally well. The cello and flute sound most natural, the percussion is clean and transparent, and the voices are realistically integrated into the aural stage. For lovers of pure sound alone, the disc may prove a worthwhile investment. More important, fans of modern music may also find the disc of interest.

Email ThisBlogThis!Share to TwitterShare to FacebookShare to Pinterest
Labels: Gubaidulina