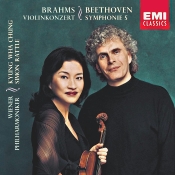 Time was you would only get a single major repertoire item on an LP or CD, filled out if needed with one or two shorter pieces. Now, major labels think nothing of coupling the Beethoven Fifth Symphony with the Brahms Violin Concerto. It could have been a sign of the times when EMI released this disc in 2001; the music industry was slumping, and budget discs and remastered older material were the order of the day. The companies were doing anything they could to attract buyers. Here, EMI have given us some of the world's top performers in violinist Kyung Wha Chung, conductor Sir Simon Rattle, and the Vienna Philharmonic. The results are not unexpectedly impressive in many ways, yet they're strangely underwhelming in others.

Much is made in the booklet notes about Rattle performing this live recording of the Beethoven from the Jonathan Del Mar edition of the score, a version that attempts to strip the music of all the barnacles and appendages that conductors added since Beethoven's day to accommodate new instruments and new styles. So it's a kind of "authentic," historical approach but without any period instruments. What this inevitably means is that the tempos are quicker, and certainly Rattle doesn't hold back; the textures are leaner, and despite the rich sonority of the orchestra, they are; and the sound is more transparent. But faster is not always better, and in the first movement, especially, Rattle's hell-bent-for-leather attack soon becomes a bit wearying. Don't get me wrong; it's not that it isn't thrilling because much of it is, and the Vienna Philharmonic continues to sound like one of the world's great ensembles. It's just that the performance becomes a little monotonous at so unvarying a pace, with Rattle showing little enthusiasm for the finer points of the music. However, after the first movement, the rest of the symphony fares better, actually becoming something near traditional by the end. The interpretation is different, to be sure, and rewarding in its own way, but it is still not so electrifying or so exciting as the renditions by, say, Carlos Kleiber (DG) or Fritz Reiner (RCA or JVC).

Whatever, the Brahms concerto inhabits a slightly better world, and in at least one instance, a literally different world. Recorded in a studio, Ms. Chung produces an exceptionally exhilarating Brahms Violin Concerto. She storms, she rants, she rages through the monumental opening movement and then concludes it in a heartbreaking episode of sweetness and light. I like what Sarasate remarked when somebody asked him to play the piece; he said he declined on the grounds that he had no intention of listening, violin in hand, while the solo oboe played the only melody in the whole score. Well, the Brahms has never been my favorite concerto, either. In fact, every time I hear it I wonder if the violin is ever going to make its entrance at all. But in Ms. Chung's hands, it sounds rather captivating, at least for a while. She may exaggerate the stormier moments, but she handles the softer passages with such delicacy you can almost forgive her excesses elsewhere.

EMI's sonics are pretty good for a live recording (2000) and even better in the studio (2001). The orchestra sounds leaner than usual in the Beethoven, thanks to the new edition, and the engineers take full advantage of the work's new clarity. The live sound is close but detailed. The stereo spread is wide, yet without leaving any holes in the middle. Ambiance is subtle but adequate for replicating a large environment. And in the concerto Ms. Chung's violin seems almost ideally balanced with the orchestral support. With at least an interesting Beethoven and a fairly nice Brahms, the disc makes a reasonably appealing though not entirely satisfying listening experience.