Leopold Stokowski, Symphony of the Air and Chorus. HDTT HDCD127. 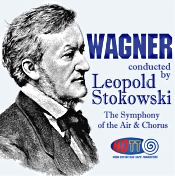 Stokowski was Stokowski. There's nothing we can do about that. The man certainly had his fair share of detractors, who claimed he pulled and tugged, twisted, distorted, and exaggerated the music he conducted so far out of shape it was hardly recognizable anymore. Fortunately, he had a lot more fans than critics, and he became one of the most well-loved conductors of the twentieth century. And he probably did more to popularize classical music than any single conductor of the century, too.

On this HDTT (High Definition Tape Transfers) remastering of some of Stokowski's Wagner orchestral music with the Symphony of the Air and Chorus, we hear mostly the best of what the man could do when he tried.

Opening the program is the longest track, the Overture and Venusberg music from the opera Tannhauser. The overture is, in fact, the perfect introduction to the Stokowski style. It is opulent as only the old Maestro could make it. OK, it might not be everything the Wagner fan could want; it's probably not introspective enough or dramatic enough; but it's so smooth, so free and flowing, it makes a lot of other Wagner performances sound crude by it side. This is Wagner for the true Romantic, never quite sentimentalized but positively glowing in its overall rich, luscious, sensuous effect. When the chorus enters briefly at the end, it sounds vividly clean yet still lustrous and otherworldly; maybe not quite as soulfully uplifting as it could be but wonderfully exciting.

Next, we hear the Prelude to Act III of Tristan und Isolde. If anything, under Stokowski's direction the prelude appears grander and more imposing than the opening track, even though it might be just as familiar music. Stokowski shapes and molds the music into a huge tapestry of immense power. The effect appears sometimes startlingly imposing, the orchestra sounding like one immense organ playing.

Finally, Stokowski closes the show with The Entrance of the Gods into Valhalla from Das Rheingold. Stokowski's handling of this last number is as grand as they come. The conductor paints as intense and memorable a picture of the proceedings as I've heard from anybody.

If there is any minor misgiving I have about the album, it's that I seem to remember the LP edition I used to have including The Ride of the Valkyries. Here, we get only three selections, and they are relatively brief, with a total disc playing time of only forty-three minutes. This is, apparently, the entirety of the tape from which HDTT transferred the music.

Producer Richard Mohr and engineer Robert Layton recorded the music for RCA in 1961. HDTT remastered it in 2013, transferring it from an RCA 4-track tape. The resultant sound is big and full, with an excellent frequency balance. There's a pleasantly realistic upper bass warmth that helps the music come alive. The orchestral depth is quite good, and the stereo spread is fairly wide. The dynamic range accounts for another factor in the music's lifelike quality, along with good impact and a sparkling high end. What's more, the chorus sounds natural, not bright or shrill, the voices clear but sweetly rounded as in real life. This is, in brief, the perfect way to listen to Wagner: plush, lush, opulent, part and parcel of the silky-smooth sound Stokowski always tried to achieve.

If you have any of Stokowski's RCA Wagner recordings, you might want to hear the same music remastered on this HDTT disc; it might impress you as much as it did me. Even the imported German RCA CD I used for comparison purposes, transferred using 24-bit/96kHz technology, didn't have the clarity of the HDTT disc.