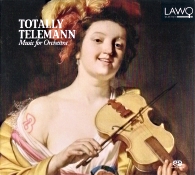 Being unfamiliar with the group Barokkanerne, I looked them up at our friends from Wikipedia, who inform us that "Barokkanerne is a Norwegian baroque ensemble based in Oslo, Norway. The ensemble was founded in 1989, playing on period instruments and gives concerts both as a chamber music group and orchestra. The ensemble has toured in Israel and Lithuania, participated in the Oslo Chamber Music Festival, the Oslo International Church Music Festival and has done productions for NRK TV and radio. Barokkanerne has its own concert series, called Cafebarokk, at Cafe Teatret in Oslo.

"The ensemble consists of professional musicians, permanent employees in the Oslo Philharmonic and the Radio Orchestra, as well as freelance musicians." Thank you, Wiki folk. Barokkanerne have made a small number of recordings over the past quarter century, so it seems odd that I've never run into them before. Nevertheless, better late than never, and I'm glad I found them.

Here, Barokkanerne are playing Telemann. That would be German Baroque composer and instrumentalist Georg Philipp Telemann (1681-1767), one of the most-prolific composers of all time and considered by his contemporaries the leading German composer of his day. On the present album, Barokkanerne accompany soloists Kati Debretzeni, violin, Ingeborg Christophersen, recorder, Alfredo Bernardini, oboe, and Torun Kirby Torbo, flute on four brief concertos by Telemann, along with the orchestral suite La Bourse.

As far as period-instrument bands go, Barokkanerne are quite good. They never sound rough or raggedy as can sometimes be the case with such ensembles. Indeed, if anything, they sound too polished, too precise. They apparently play without a conductor, but it doesn't seem to have any effect on the sophistication of their performances. I have to admit, however, that I've gotten rather used to the lighter, more buoyant style of a period-instrument group like Philharmonia Baroque than the more sedate, more straightlaced approach usually taken by Barokkanerne. Still, there is much one can praise about Barokkanerne's interpretations of Baroque music. After all, people nowadays call the late-seventeenth and eighteenth centuries "The Age of Reason," so there is good cause for Barokkanerne to perform Telemann in a somewhat analytical fashion.

In any case, Barokkanerne and the various soloists do a splendid job playing as one, supporting each other, and creating a rich tapestry of musical colors. Among my favorite items were the opening piece for flute and violin solos and the later orchestral suite, both of them vibrant and fun, even if they don't exactly bubble over with mirth. Barokkanerne, as I say, go after elegance and refinement above all; and here they succeed. The Adagio of the B-flat Concerto for Violin and Strings is also quite lovely and alone should win the album a flock of fans, as should the final movement of the E minor Concerto for Flute and Recorder for its virtuoso playing.

Producer Jorn Pedersen and engineer Thomas Wolden recorded the album at Jar Church, Baerum, Norway in March 2014. They made it for playback via hybrid SACD, two-channel stereo (CD and SACD) and, I assume, multichannel (SACD). I say that "I assume" there's a multichannel SACD layer because nowhere on the packaging or within the booklet insert could I find any word about the disc's playback capabilities, and since I only have my SACD player hooked up in two-channel, I was unable to determine for myself the disc's multichannel functions.

Anyway, I listened in two-channel SACD and thought the sound was fine. Barokkanerne is a pretty small group, so you would expect the sound to appear fairly transparent, which is the case. Although they seem a little too up-close for my taste, the sound is both warm and natural, with a pleasantly mild room resonance to add further to the lifelike effect. Instruments show up clearly separated and cleanly delineated, with a wide stereo spread. It's a good listen.

Email ThisBlogThis!Share to TwitterShare to FacebookShare to Pinterest
Labels: Telemann