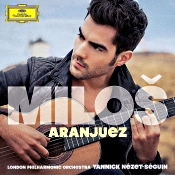 Spanish composer and pianist Joaquin Rodrigo (1901-1999) wrote his Concierto de Aranjuez in 1939, and it has since become probably the most-popular guitar concerto in the world. As such, it is almost a written law that every classical guitarist worth his or her salt must record it at one time or another. In 2013 it became Montenegrin guitarist Milos Karadaglic's turn. Milos joins the ranks of such heavyweights as Narciso Yepes (HDTT, DG, Decca), Angel Romero (Mercury), Pepe Romero (Philips), Carlos Bonell (Decca), John Williams (RCA), Xuefei Yang (Warner), David Russell (Telarc), Julian Bream (RCA), Sharon Isbin (Virgin), Christopher Parkening (EMI), and about 800 other classical guitarists who have given us excellent performances of the work. Fortunately, Milos holds his own, and he will not disappoint his fans.

Milos's approach to the Concierto is notably romantic. Not that it's any slower or more sentimental than other player's have taken it; it just sounds a bit lusher and more luxuriant than most. There's nothing wrong with this approach; it rather fits the mood of the music. What Milos does best of all is to create a fine Spanish atmosphere for the music. We get a feeling for the ornate patios, sunlit terraces, and redolent gardens of the Aranjuez palace. What he does next best is present us with a lovely Adagio, haunting and evocative. This may not be the most thrilling or lively account of Rodrigo's work, but it is sweet and sensitive, and I think that's exactly what most folks would want from it, especially Milos's followers.

Next come two pieces for solo guitar by Spanish composer and pianist Manuel de Falla (1876-1946): "Homenaje," a homage to Claude Debussy, and "Danza del Molinero" from El sombrero de tres picos. Milos lends them an appropriately Spanish flavor, still well within the Romantic tradition but taking up the inflections and nuances of the landscape more than capably.

Then it's back to Rodrigo, starting with an appropriate transition, the "Invocacion y danza," a solo homage to Falla. It's one of the best pieces on the program, with Milos appearing greatly to savor the color and shadings of the music.

The album concludes with Rodrigo's Fantasia para un gentilhombre ("Fantasy for a gentleman"), which the composer wrote on commission for the great Spanish guitarist Andres Segovia and which Segovia premiered in 1958. It's essentially another concerto for guitar and orchestra, this time courtly and stylish, drawing its tunes from the seventeenth-century Spanish composer Gaspar Sanz. Milos handles it in a refined and stately manner, filling it with rich detail, without quite the romantic countenance he conveyed in the Concierto. The third-movement dances have a particularly zesty bearing to them.

Maestro Nezet-Seguin and the London Philharmonic know enough to stay out of Milos's way, lending a solid support without ever overshadowing the soloist's work.

Producer Sid McLauchlan and engineer Rainer Maillard recorded the music at Abbey Road Studios, Studio 1, London (Concierto, Fantasia) and Nikodemus-Kirche, Berlin (Homenaje, "Danza," "Invocacion") in August and September 2013. The recordists have captured a pleasingly agreeable sound, warm and comforting. In the orchestral pieces, the orchestra appears well spread across the front speakers, with the soloist centered in front of them. In terms of dimensionality, it isn't a particularly realistic sound, though, the guitar a bit larger than life and the orchestra somewhat lacking in depth. The transients are pretty soft, too, and in the solo numbers there's a fairly resonant environment, so don't expect audiophile-quality sonics. But, as I say, it's a pleasant enough sound, easy on the ear and matching Milos's romantic interpretation of the music.

Finally, and not that it matters, the folks at DG have chosen to include fully ten pictures of Milos on the packaging and in the accompanying booklet, plus a shot of his hands. And although Joaquin Rodrigo and Manuel de Falla are the featured composers on the program, there is nary a mention of them on the jewel-box cover. Just sayin'.