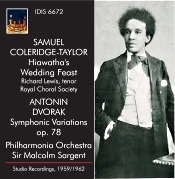 Samuel Coleridge-Taylor (1875-1912) was an English composer of such distinction in his relatively short musical life that some of his admirers at the time referred to him as the "African Mahler." Today, people hardly recognize him at all, or if they do, they confuse him with the English Romantic poet Samuel Taylor Coleridge, after whom the composer's mother named him.

In any case, in 1898 Coleridge-Taylor, with the help of conductor and composer Edward Elgar, premiered his cantata for chorus and orchestra Hiawatha's Wedding Feast, Op. 30, No. 1, which pretty much made his name. Apparently, Longfellow's poem "The Song of Hiawatha" inspired the composer (he would even later name his son Hiawatha), and with the success of Hiawatha's Wedding Feast, Coleridge-Taylor went on to write two sequels for a Hiawatha Trilogy.

Then, in the early 1920's, about a decade after Coleridge-Taylor's early death from pneumonia, the Royal Albert Hall began a series of yearly productions of the Hiawatha music, mostly conducted by Sir Malcolm Sargent, who recorded the material several times, the final one being the recording we have here. It's a 1962 studio recording, made on the fiftieth anniversary of the composer's death.

The disc presents Coleridge-Taylor's work in four sections: "Introduction: You shall hear"; "He was dressed in shirt"; "Onaway! Awake, beloved!"; and "Thus the gentle Chibiabos."

I doubt that anyone before or since has captured the spirit of Coleridge-Taylor's music better than Sir Malcolm in this '62 performance. Even today his interpretation sounds fresh and alive, the melodies carefully and lovingly presented. Most important, the chorus sings with feeling and precision, and tenor Richard Lewis sounds quite elegant in the famous aria "Onaway! Awake, beloved," which became something of a hit tune among tenors in the first half of the twentieth century.

The chorus sings with rigorous articulation and a zesty affection for the music. Sargent chooses moderate tempos throughout, one assumes speeds and phrasing well thought out and well tested over the years.

One doesn't see many new recordings of this music anymore, which is a good reason why Sargent still has practically the field to himself. I suspect that modern audiences find the music rather old-fashioned, perhaps even corny, redundant, and dull; therefore, record companies are reluctant to record it. Meanwhile, we have Sargent's recording, which will suffice, no doubt, for many years to come.

In addition to Hiawatha's Wedding Feast, the disc contains a studio recording of Antonin Dvorak's Symphonic Variations, Op. 78, again with Sir Malcolm and the Philharmonia, this time from 1959. The Dvorak work begins very gently and proceeds from the tranquil main theme through twenty-seven variations, all of which Sir Malcolm negotiates with ease, nicely bringing out the Czech spirit of the piece. It's actually a delightful and probably underappreciated piece of music. I'm glad we have Sargent's reading around as a reminder how good it can be.

As I say, Sir Malcolm made the Coleridge-Taylor recording in 1962, and at the time EMI released it. I owned the vinyl LP for many years until it became a casualty of the CD era. I always figured to replace it, but when EMI finally did issue it on compact disc, I must have missed out. Since then, EMI and other record studios have reissued it on CD, and I believe it may still be available on Classics for Pleasure and a few other labels. Now, the folks at the Italian record company IDIS (Istituto Discografico Italiano) have come along with their 2013 remastering of the work.

The only snag: I'd swear both the Coleridge-Taylor and Dvorak works are in monaural. I'd also swear Sir Malcolm recorded the Coleridge-Taylor in stereo and that my old LP was in stereo. So what's going on? Nowhere on the IDIS packaging or on the disc itself could I find any indication of mono or stereo, and my e-mail to IDIS went unanswered. My conclusion: Either this remastering is in monaural, or it's the narrowest stereo I've ever heard.

That said, the sound quality (mono or stereo, who knows) is quite good in both pieces. It's full and rich, with no undue brightness in the upper midrange or treble and no edge on the voices. There is also a fairly wide dynamic range and fine transparency throughout, with only the faintest hint of background noise. The frequency response is a bit limited, though, and there is a slight softness to the upper treble; otherwise, the sound appears reasonably natural and well balanced.

Email ThisBlogThis!Share to TwitterShare to FacebookShare to Pinterest
Labels: Coleridge-Tayor